Advance warning: Mr Robot and I are thinking of getting a loft conversion, and that means I’m going to bore you massively about bedrooms over coming months. YEARS even.

It’s slightly odd to think if we go ahead we’ll have a brand-new room in a Victorian house. An old house, yet with a room no-one else has ever lived in. We’re already thinking it’d become our main bedroom; our current bedroom would become the spare, and what’s currently a tiny spare room full of books and stuff without a proper home would become the stairwell to the new room, plus we’d get loads of shelving/storage put in there so my craft gubbins, his photography stuff, the camping kit and so on would all have somewhere tidy to live.

And, of course, that’s freeing me up to think about both bedrooms. The new one would be a complete blank canvas, so anything’s possible. We’d probably get the wardrobes built in, and that sort of sleekness makes me think of both later art deco – the moderne look of the 1930s and 40s – and cabins on cruise ships. And yeah, I know freestanding wardrobes were actually the norm through that period, but the idea of deco is a good place to jump off from. The wardrobes could always be disguised to be virtually invisible, with the rest of the room having a more typical moderne look.

I did also look at later styles, especially the 1950s and 1960s, but they didn’t strike me as the sort of thing I fancy in my bedroom. They either feel like too much, with quilted satin bedcovers and dense, strongly-coloured florals, or not enough, with very minimal lines and hard corners. I’m not dismissing that era out of hand, but I don’t think I’ll find masses of inspiration there. Still, I'll probably spend plenty of time browsing images on Pinterest for ideas, and some midcentury stuff might creep in.

The bedroom could embody more of the ‘Victorian explorer’ feel of the rest of the house, but Mr Robot’s keen to keep things light and bright, and ‘light and bright’ are words you’d rarely associate with the Victorians. That said, I could end up finding a wonderful fabric for sale while I’m in India and deciding to theme the room around that. At the moment all I'm really keen on is to make sure there's a bit more green. My glass dressing table set is a super shade of green, and it looks really out of place in our current blue/grey/cream bedroom. (I could have waited to find a blue dressing table set, but when the charity shop gods send you a green one for £15, you don't say no thanks...) And that colour and shape does swing me right back to later deco. 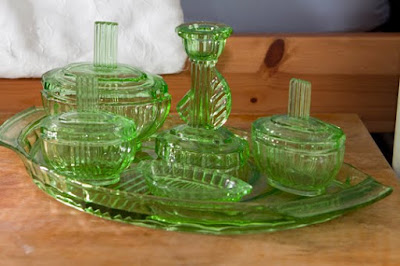 How did you plan out your bedroom? Or did it just sort of evolve?
Labels: homewares house