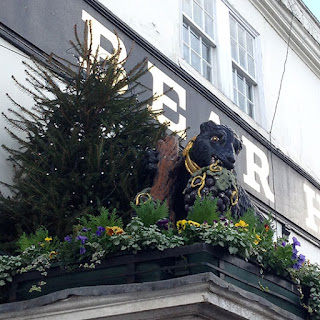 So, Project Get Through Deadlines continues. This mainly being rigidly organised at work, and doing sod-all at home beyond ensuring we're clean, have clean clothes, and are fed. I've been finding it a little frustrating that a lot of my friends don't seem to take it seriously; they get narked that I don't want to meet up when I really need to go to ground at weekends right now. Arranging things means slotting one more deadline into a schedule, and it's just too much.

Anyway, I've been enjoying a bit of gentle, no-pressure pottering. Saturdays usually mean a trip to Devizes to go to the butcher. Devizes is awfully pretty, and the old, not-very-bear-like bear atop the front doors of the Bear Hotel was looking very festive. King George III and Queen Charlotte stayed there; I wonder if the bear is old enough to have been there to greet them?

We also took time to wander round Trowbridge. Since the butcher closed its Trowbridge branch we haven't done that as often - and we're probably not alone in that. That's how town centres die... Except that Trow is a vibrant multicultural town, and a new desi deli has opened where the butcher used to be, and there's now a Polish butcher too. The latter doesn't have anywhere near the range our old one stocked, but it does do excellent sausages and homemade Polish croquettes and dumplings, and between the two if we can't make it over to Devizes every weekend, we'll be able to stock up in town. I dare say there will be some idiots grumbling about the fact the shops aren't 'British' but I think it's ace. Nice to see new businesses starting up and bringing some life back to the High Street. 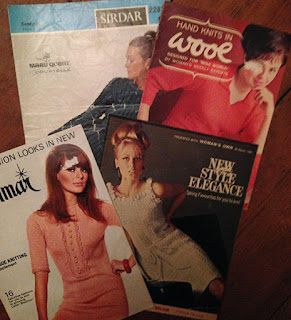 The number of charity shops often also makes people grumble, but I enjoy looking round them. I didn't find much over the weekend, but did get some more knitting patterns. No, I don't need more knitting patterns. As the saying goes, "I'm not needy, I'm wanty." And one was a Mary Quant. The pattern pile had older ones, but I have quite a few 40s/50s knitting patterns, and I really want to do some 60s stuff. That's my excuse. There are some fantastic little knitted suits in the booklets.

Thinking of the later decades of the 20th century, have you seen Mindhunter on Netflix? It's based on the early days of the FBI's profiling department, when they started interviewing serial killers and working out how to track them, and is set in the late 1970s. Visually, it's incredibly subtle: there's a slight Kodachrome warmth to the colours, but on the whole things are kept very restrained. Clearly the programme makers were keen for viewers to get caught up in the story without being distracted by the style. The clothes are 70s, but in a very restrained way, the decor is, but similarly muted. It's a far cry from disco, glam rock, or any of the exuberance you associate with the era (given the subject matter, exuberance would be pretty tasteless). It could be argued that it's a very 2010s take on the 1970s, or possibly just a very bland take on the 1970s, but I've found it interesting to see such a loud decade reinterpreted in such a downbeat fashion. Anyway, the programme is gripping, if disturbing.