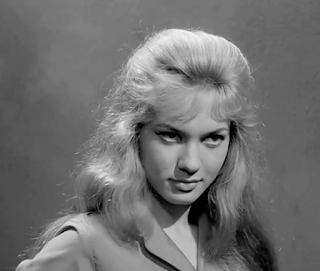 It was supposed to be shocking in its day, but I couldn't help being charmed by Beat Girl. I'd seen it years ago, but couldn't remember much about it, so took the opportunity to reacquaint myself when it was on Talking Pictures. Father Paul comes back from three months away with his new 24-year-old, blonde, French wife in tow, and finds his daughter Jennifer (who's in her teens herself, and looks like a baby Bardot) has been going off the rails in his absence.

This being Britain in 1960, 'going off the rails' involves being a bit mouthy and hanging out in a Soho coffee shop that also hosts bands. The costumes are to die for. French Ma Nicole's first suit is heavenly, while the wild girls wear the most delightful pencil skirts and tight sweaters. Jennifer sneaks out and goes dancing in a shirt and jeans. Rrrrrebellious! To be honest, I was hypnotised by her hair, it's so long and thick. Nowadays I'd assume extensions were used, but I guess it really was all actress Gillian Hills' own. It's also rather baffling how both Jennifer and Nicole seem to wear a full face of makeup to bed.

Anyhow, the teen rebellion goes one step further when Jennifer hears what the girls in the strip club opposite the coffee shop earn, and decides to venture into the club for herself. Enter Christopher Lee as the sleazy manager, who's shacked up with a former friend of Nicole. Having taken burlesque lessons I was more interested in the dancer's technique! (Rather a lot of 'flossing' with a bit of fabric, in case you were wondering. My teacher banned flossing as tacky.) There's a bit of road racing and a scene where all the kids lay with their heads on train tracks in front of an approaching engine to see who'll stay their longest, and Jennifer throws a wild party at her home, but really we all know that's just fluff and Jennifer's on a one-way trip to Stripsville. Or is she? It's a strip club, so someone's going to come to a sticky end...

With beatniks, teds and tough guys, this is very much of its time, and I think it's ace.

In other movie news
I mentioned back in May that Universal was planning to make a whole series of films reviving its classic movie monsters. Well, The Mummy didn't do well, and it looks like the plans are being scaled back, if not abandoned entirely. Can't say I'm surprised. It all sounded extremely ambitious, without a great first film to build on, and it's much harder to cram a galaxy of stars into a horror film than into a superhero movie packed with characters.
Labels: 1950s 1960s film