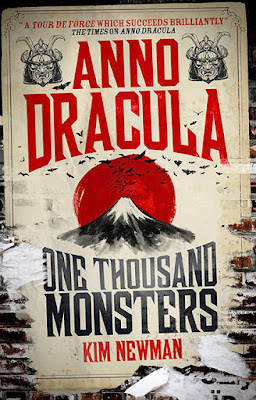 Do you have a favourite writer or band or artist who you think should be more popular than they are? Kim Newman falls into that bracket for me. I suppose his blend of supernatural stories and truckloads of obscure pop-culture references don’t really appeal to the mainstream. He’s not gory enough for the hardcore horror fans, but doesn’t trade in the descriptions of pretty clothes and prettier boys that seems to appeal to the other end of the market. So One Thousand Monsters will probably only get picked up by those who appreciate what fun his books are.

That’s a shame really, because this novel slots into Newman’s Anno Dracula cycle, and represents a real return to form after the disappointing Johnny Alucard. Not up with the series? Anno Dracula is set in Victorian London, where Drac has married the widowed Queen Victoria and Jack the Ripper – Jack Seward – is killing vampire prostitutes in the East End. The Bloody Red Baron has a WWI setting; the now-exiled undead Prince Consort has gained influence in Germany and is creating a squadron of undead super-flyers. Dracula Cha Cha Cha is set in 1950s Rome at the time of Dracula’s next wedding, a swirl of movie references in that one. And Johnny Alucard is at the end of the 20th century.

One Thousand Monsters turns the clock back to the 1890s, and sees Newman’s returning original character Genevieve Dieudonne plus a boatload of vampires who’ve antagonised Dracula seeking sanctuary in Japan, where they come to realise they’re penned in and under threat. Sometimes Newman’s plots don’t hold together as satisfyingly as I’d like, but this one does, which is good because my knowledge of Japanese mythology, film and literature is really, really poor. I thought Johnny Alucard had a weak plot, but spotting the pop-culture references was a constant source of fun and helped hold things together and keep me reading. Not getting the references in One Thousand Monsters meant the storyline had to carry things. And it does.

I did Google references as I read, because I’m like that, but you don’t need to. All the same, I think it’s best when you get them straight away, which is probably why Anno Dracula and Bloody Red Baron are my favourite books in the series. The stories are strong, and I understand the kaleidoscope of references immediately, which means they impact on an almost subconscious level. I think to get the most out of One Thousand Monsters you really need to have a love of Japanese culture, both historic and modern pop culture. Folkloric monsters like kasa-obake (an umbrella monster, yes really) and Yuki-onna, Lady of the Snow, rub shoulders with the samurai from Kurosawa's Yojimbo. Even the book's title is a riff on that of a Japanese horror film of the 1960s, One Hundred Monsters.

Would I recommend this? I’d recommend a Newman to everyone, but for readers of this blog I’d choose either Anno Dracula and The Bloody Red Baron (for those who like their vintage early 20th century) or The Man From The Diogenes Club (for lovers of the 60s and 70s - though it's not part of the Anno Dracula series). I’ll still keep this book, mind you...
Labels: 1890s books horror Victoriana