On my way into work this morning it hit me that I wasn't entirely convinced with this outfit. I had a yearning for something different, so got out a deadstock St Michael skirt I bought from a charity shop over the summer. I haven't worn it before as I really don't think it's me, but you know what it's like when you see 20th-century deadstock, you pick it up anyhow - or is that just me? It's got an elastic waist at the back, and I'm not a fan of those, but I decided the pale sage green top (BHS, also deadstock from a chazza but 21st century) would cover that. It would give me a reason to break open the khaki tights, till today still packaged in my drawer.


I did my best to glam things up, with a 1950s goldtone and brown diamante Lisner necklace, a 1970s brown velvet jacket from Kinky Melon, a 1960s chestnut mock-croc handbag, and brown shoes by Neosens that I thought looked a bit steampunky when I bought them.

I do like the shoes/tights/skirt together, and the jacket is gorgeous. I reckon the problem is the blouse. It's wrinkled here because I've just got in from work. This is how I looked in the office today. I do like this blouse; it's comfy, doesn't have too much button gape (a perennial problem for me), isn't tight round the tummy and is a nice length. Looking at the photo, though, I can't decide if it's too light in colour to go with everything else, or possibly being worn over my skirt, rather than tucked in, made it look sloppy. Perhaps a fine-gauge rust or deeper sage shorter top would look better. 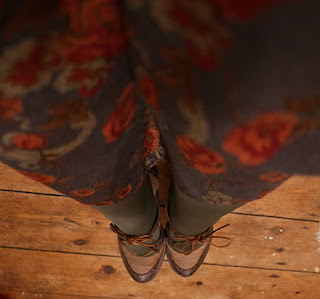 What do you think?

And in other news...
I went with my team to see Rogue One, the new Star Wars film, yesterday. I wouldn't say it was a great film, but it pushed all my nostalgia buttons so I couldn't help enjoying it. Typical Star Wars really; the characterisation wasn't brilliant, but the scenery and action sequences did make me feel as though I'd been taken across the galaxy.

Ziggy has been exiled from the living room for unwrapping presents that aren't his; he's already had a go at a card/little package that Cate sent me. (Thank you very much, Cate - he only had time to savage the jiffy bag.) I'm now going to have to tape up a hole in Mr Robot's present as Ziggy has pulled a corner off it. Little toerag! As though Pippin trying to eat fairy lights weren't bad enough...
Labels: charity shopping outfit post