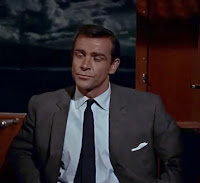 This time of year makes me think of Bond films*. Once Christmas gets here, then it'll be time for Muppets' Christmas Carol (the rare version with Belle's song!), It's A Wonderful Life (Mr Robot's annual hankiefest) and the Lord of the Rings special editions, but before then something about the season makes me long for Bond, James Bond. That said, when ITV does show them – they seem to go through spells of being on ITV3 or ITV4 – the lot are shown in succession and there are some I always watch, and others I always miss. Frankly, life's too short to bother with GoldenEye. Here are my must-sees.

1 On Her Majesty's Secret Service
My favourite, this one. I don't think George Lazenby was a brilliant Bond, he feels too urbane, but it's got one of the best scripts AND Diana Rigg as the love of Bond's life. Blofeld's International House of Hotties in a ski-resort-allergy-research-centre at the top of an Alp is so very, very 1960s - of course, he's not really researching allergies, he's plotting to blackmail governments, and Bond has to stop him. There are ace skiing sequences too. The final sequence is a tearjerker.
2 You Only Live Twice
Politically dodgy nowadays, given Bond's attempt to pass himself off as Japanese, this nonetheless has my very favourite Bond girl outfit: Aki's eau-de-nil shift with a chiffon overlay. Crisp, cool, and elegant, much like Aki herself. It also features Tiger Tanaka, a Bond ally I'd love to see return. Blofeld again proves why he's the villain par excellence, this time setting up home in a dead volcano. (Honestly, Blofeld really should have taken a long, hard look at himself, and realised that he was never going to make a success of the whole 'taking over the world' thing and moved into designing super-bases for the super-rich. Instead of a failed villain, he could have been the world's greatest architect/interior designer.)

3 From Russia With Love
If anyone was going to walk into a honeytrap, it would be James Bond, so the SPECTRE's attempt to lure him with a lady sort of makes sense. Fortunately for his bait, he's prepared to escort her and her valuable cipher machine across Eastern Europe to defect, leading to escapades in Turkey, an adventurous train journey, and a boat to Venice. Features the entire Bond series' most memorable female villain, knife-shoed Rosa Klebb.
4 The Man With The Golden Gun
With a theme song so cheesy it causes trouble for the dairy-intolerant viewer, Christopher Lee stars as the assassin of the title. He's one of the few villains with a base to rival Blofeld's best: a luxurious villa on a Thai island. A lot of people don't like this one, and I admit I tend to forget things like the dreadful sheriff on holiday and Goodnight retrieving the Solex in her bikini. I'm not sure if this or Live And Let Die is my favourite Roger Moore outing; the latter scared me silly as a kid, but Christopher Lee is prime crumpet.
5 Skyfall
This is a modern film, but of all the 21st century ones, to me it feels like an old Bond film. That's probably intentional, as Casino Royale effectively reset Bond, and Skyfall starts putting classic elements from the early films back in place, at the same time as it plays with them. While it's got gadgets and girls and explosions, those things aren't the heart of the story. The relationships between the characters, and what it means to be an agent, are the real meat of the film, and Skyfall is all the better for it.

Got a favourite Bond film? Or can't stand any of them?