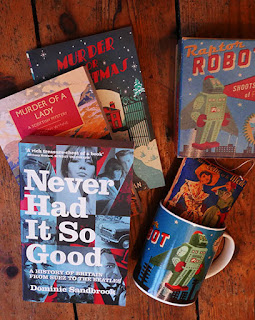 I hope you had a great Christmas! I've been a terribly lazy pudding and have done very little, but given how hectic the first part of December was, I think I've earned it. Considering my extremely basic outfit this morning, which didn't even include jewellery or perfume, I thought: Goody and Vix would NOT approve of this, and then I thought: but they're big on dressing to please onesself, and if I want to spend a week in slobwear, they'd probably say, 'Go forth and slob, O Mim.'

As always I got thoroughly spoiled, though I didn't get so much vintage stuff this year.


I did get some fab books from my mum and her partner, and my brother and his girlfriend (hoorah for Amazon wishlists). Never Had It So Good is a history book covering the late 50s and early 60s. I don't know much about that period, so hopefully it will be edumacational. (I wasn't very impressed with the BBC's version of Agatha Christie's Witness For the Prosecution this Christmas; perhaps someone should start sending them the British Library's reissued classic crime novels with the suggestion that they make those rather than try to turn Aggie's works into Peaky Blinders.) My dad and stepmother gave me a brilliant mug with a retro robot on it. I'd been eyeing up Jay's Robotique and Cosmos ranges for ages so Dad's choice of mug was spot-on. I don't usually keep packaging, but that robot box is too good to get rid of. Sticking out of the mug you can see the retro-print lavender bag Cate sent me. That will be keeping my coats fresh from now on! 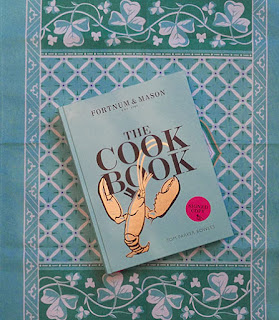 Most of what Mr Robot got me was modern – a bottle of Ormonde Jayne Tsarina perfume was the biggie – or food-related. The latter included a Fortnum and Mason teatowel and cookbook. I don't know if people outside the UK know of Fort Noms; founded in 1707 they've been grocer to every monarch since Queen Anne, and are noted for top-notch food. Not fancy, but the best possible quality. (They also have a superb perfume department on the top floor.) The recipes in this book are mostly for classics, and are fairly plain. They're the sort of recipe where good ingredients are critical, because there's nowhere for anything substandard to hide. I already have plenty of books dealing with classics, but what makes the book interesting is the double-page pieces on how Fortnums has done things, whether that's the ice-cream parlour of the 1950s, or the hampers and picnic baskets beloved by the Victorians. It's packed with illustrations from the Fortnum and Mason catalogues of the 1930s and 1950s too.

He also got me a toasting fork and two packets of crumpets to toast on our living room fire. Well, who doesn't want a bit of crumpet at Christmas?

And now I'm going to visit your blogs to see what goodies your loved ones gave you, and what you've been up to.
Labels: robot data