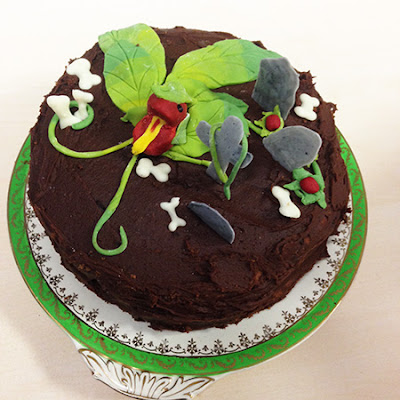 Halloween's my favourite holiday; I don't care if it's not something we've traditionally celebrated in Britain. I had planned to do a monster spread (literally) for work this year, but then I got ill last week. I soldiered on for three days, but on Thursday and Friday completely lost my voice and couldn't do anything.

I hate being ill. Hate it. It's so unproductive. I have no end of admiration for the bloggers I see who keep on going despite chronic illnesses. I just lay around on the sofa feeling sorry for myself. (On my sick days rewatched Partners In Crime; I'm more annoyed than ever that both that and Jekyll and Hyde got cancelled. There's very little in the way of decent deco-era programming on telly at the mo.)

Anyway, here's this year's Halloween cake, which draws on 2013's pumpkin patch and 2014's Martian - both those were pretty successful, so instead of being adventurous I went with what worked. I made a load of monster cupcakes too. I hope your celebrations, if you're celebrating, went more to plan than mine did. My piping skills (I piped the bones and tombstones from white/ coloured white chocolate) are improving to the point where I'm thinking of asking Santa to bring me some acetate and a chocolate thermometer so I can make patterned 'collars' for cakes. That's not at all a vintage technique, but I suppose I could turn some of my favourite vintage embroidery patterns into chocolate collars.