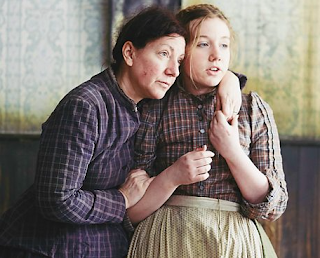 Have you been watching Victorian Slum? Two episodes have been broadcast so far, and see a group of intrepid individuals moving into a slum in the East End of London, living through conditions decade by decade, Back In Time For Dinner-style. I was a little surprised that Michael Mosley was presenting as he's not a historian, but he is very entertaining. So far the 1860s and 1870s have been broadcast. The people taking part include a tailor and his family, an extended family, a single mother, and a couple from the country running a shop, so a broad spectrum of the social groups who would have lived in a slum area is covered. One participant is an amputee, and says he took part to get an idea of what life was like for poor people in Victorian London.


The shock the participants experience on first seeing their 'homes' is clear - and to be honest, the notion of the very poorest people renting a space to sleep hanging over a rope because they couldn't even afford a bed at the dosshouse and buying bread by the slice because they couldn't afford a rope is awful. The participants have to try to earn a living: piecework for women and children, selling watercress, granddad goes out to slog as a labourer... Of course, they're not expected to work with poisonous chemicals or live in utter filth (though there is a fair bit of mud), but it still strikes me that they are very determined and to be applauded for putting up with the conditions.

If, like me, you're into this sort of living-history programme, Back in Time for Brixton will be on in November, and features a family being whisked through recent black British history. (For people not familiar with British history, the 1950s saw a lot of migration to the UK from the Caribbean, as the country needed workers as it rebuilt.) I'm really hoping this one captures the fun of the other Back in Time... programmes, without neglecting the important historical side and some hard truths, such as how hard it could be for people of colour to rent decent housing.

I'm not a fan of anything baby-related, but BBC4's Black Midwives, another part of November's Black and British season, might appeal to fans of Call the Midwife, as it relates the experiences of Caribbean midwives who came to the UK at the founding of the NHS.

Again in November, BBC2 will be broadcasting a new seven-part drama, Close to the Enemy, by Stephen Poliakoff. It's about an intelligence officer trying to persuade a German scientist to work for the RAF just after WWII, with Britain still in the grip of austerity and scrambling with the US and Russia to 'mop up' German scientists and engineers. Close to the Enemy's cast includes Lindsay Duncan, Angela Bassett and Philip Glenister. I have mixed feelings about Poliakoff's work, having adored Shooting the Past, really liked most of Dancing on the Edge and thoroughly disliked Glorious 39, but even when I don't like his dramas they're never boring, so I'll give this one a go. As it's Poliakoff, even if I don't like the story it's sure to look gorgeous.

And the goodies just keep coming next month: if you've got cable or satellite, you'll be able to watch Netflix's new drama, The Crown, about the reign of Elizabeth II; the first series is looking at the young Queen and promises lotos of gorgeous 50s costumes. (If I'm quibbling, in the stills Claire Foy, who's playing Her Madge, looks absolutely nothing like the Queen did as a young woman, and if I can spot that with my prosopagnosia, it's a really bad likeness. That said, Helena Bonham Carter didn't really look like Elizabeth Taylor in Burton and Taylor, but she when she played her she had enough of the spirit of Liz to make it work, so perhaps Foy can carry her role off on screen.)

ITV had commissioned The Halcyon, a series set in a hotel in 1940, but there's no news on the broadcast date for that one, nor has BBC2 announced a date for showing the new adaptation of Evelyn Waugh's Decline and Fall. Wah! However The Durrells should be back with us on ITV in 2017 – given the broadcast dates of the first series, I'm expecting it to be in the first quarter of the year.