The Mystery of Tunnel 51 [books] 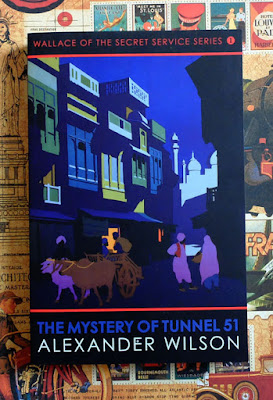 Oh, what a refreshing surprise this 1920s adventure story was! The first in Alexander Wilson's series of Wallace novels, it begins with a mystery: a soldier carrying the plans for the British defences in India is murdered on his way to deliver them to the Viceroy, and the plans are stolen by the Russians. With no idea how the plans were taken from him without anyone noticing, let alone where the plans might now be, the Viceroy calls in the head of the Secret Service, Sir Leonard Wallace, and his second-in-command, William Brien. They fly across from England to solve the mystery. Car chases, secret tunnels, and even the occasional bomb all follow as Wallace pits his wits against the nefarious Levinsky.

Missing plans, a murder, aeroplanes... Sounds like a fairly typical Jazz Age adventure, right? But if you've read the Robot for any length of time, you'll know I usually have a very good grizzle about vintage portrayals of people of colour, especially in adventure stories. Here's the thing: Wilson himself actually lived in Lahore in what was then India (now Pakistan), and worked there. He shows an appreciation for the cities and people that you don't often come across in adventure stories of the period. My heart sank when Batty, Wallace's 'man' took umbrage at some Indian staff at the Viceroy's house, trotting out some awful phrases... but by the end of the chapter he was singing their praises and learning a bit of Hindustani. Likewise, when he wanders into a local village near Simla, he seems amiable and willing to get along, even charming a group of ladies on the way despite their language differences. Batty himself is more than the comedic relief working-class characters are so often relegated to in adventure stories.

Of course, it's not perfect. The attitude towards Indian people is still patronising, and while there are all sorts of Indian policemen, businessmen and so on to be seen, heroic action is pretty much all the province of white men. The social structure of the time – posh white men in charge, working-class white men and brown men doing as they're told – is presented but not questioned. (My own McDonald forebears were in Asia at this time; none of them could ever have hoped to reach a management position within the Post Office or telegraph service, regardless of talent, because they were mixed race.) The lead villain is Russian and is described several times as looking Jewish; 1920s casual antisemitism rearing its ugly head there. But for its time, and for its setting, I was mostly pleasantly surprised by the portrayal of people of colour, and very pleased by the hero's attitude towards them.

So, taking my usual reservations into account, did I enjoy this book? Absolutely. The mystery of how the plans were stolen is an interesting one. Rudyard Kipling's novel Kim is one of the most famous about British/Russian espionage ('The Great Game') in India, but there aren't many others. It's easy to forget how much the Russian Revolution shook Europe, as it's overshadowed by the Second World War for us looking back, but in its way this is a reaction to that as much as a nod to Kipling's well-loved story. And the story is pacy and engaging. A good 'un!
Labels: 1920s books derring-do India spy