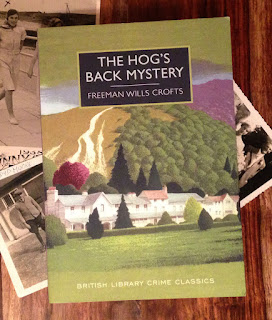 Back in 2011 I wrote a post entitled The Disappearance of Freeman Wills Crofts, musing on the way one of the biggest names in 1930s crime fiction had seemingly been lost, with what remained of his work in print being very pricy. Well, hooray for the British Library, as they've started including some of Crofts' work in their Crime Classics series.


I admit, I picked this one up at first sight not because of the author but the location: my nannie McDonald grew up on the Hog's Back, a wooded upland in Surrey. The photos I've placed beneath the book for the photo are of her and her father. My great-grandparents were in service, so not the sort of people who feature in the story. Servants and staff are, except for the purpose of giving alibis, invisible, non-people. That's not unusual in this sort of novel, by Crofts or anyone else.  I don't hold it against the book, though I am grateful the expectation that working class women will go into service is a thing of the past nowadays!

So, who does feature in the story? An unhappily married couple, her sister, her friend, the young man the wife has been flirting with, a nurse, a doctor and his two sisters, a widow and her late husband's gambling nephew. Quite a small cast. Three of those disappear, starting with the unfortunate husband, narrowing down the suspect field, but working out what has happened to the ones who vanish and what really occurred on the nights of the disappearances is a fiendish puzzle. Crofts' popular hero Inspector French steps in to investigate.

One of the strengths of Crofts' work for the reader is that he believed everything the reader needed to solve the mystery should be present in the story. By the time the detective has solved the case, you, the reader, ought to be able to do it as well. That doesn't mean the mysteries are easy to solve. I was quite pleased with myself for working out the why of the case, and even where the missing people might be found, but the who and how eluded me. (I could have done it if I'd sat down with a pen and written up a timeline, but I read for entertainment and timelines seem like much too hard work. Better to let French do the hard work, that's what he's there for.) It's nice to have such meticulous plotting.

Because French is a thinker, my 2011 comment that Crofts' books aren't the most film-able ones around still holds. At first I thought it would be brilliant on screen as the characters are a nicely mixed bag, but there are rather a lot of passages about French musing on the case or failing to sleep properly. Those bits could always be left out for a TV version, though without his thoughts the Inspector might come across as colourless. Much better read than watched is my verdict - it's an enjoyable read and a fun challenge.

And in other guff...
Sorry it's been so long since my last post, by the way. I read this book last weekend but went down with flu on Monday. Felt a bit off when I woke up, and by mid-morning Mr Robot had to collect me from work and bring me home. I shall leave out all the horrible details, but it was the most ill I've felt since swine flu was doing the rounds. I couldn't eat for three days. I'm still not 100% better, though we're on print deadline for Wednesday so I cannot miss any work next week. If you're someone with vulnerable health who's entitled to a free flu jab, get it! I read that a lot of people entitled to it don't seem to have got it this year, but if the virus I had is the one doing the rounds this winter, it's really nasty.

At least I had the kittens for company... Ziggy has turned into a snuggly little fellow.