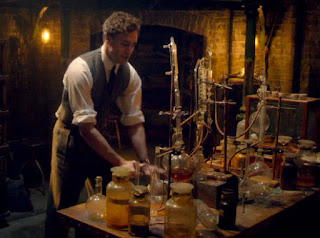 Gorsh, time for a session of SPEAK MY BRANES. And I warn you, if you click on the link, I have a lot to waffle about, starting with some musings on ITV's 1930s-set Jekyll and Hyde.
At first I hated Jekyll and Hyde. The script in the first episode was jarringly clunky. When Jekyll bellowed 'Nooooo' after getting some tragic news, all I could think was, “Didn't the entire internet mock the scene where Hayden Christenson does just that in Revenge of the Sith a decade ago? Haven't the scriptwriters learned anything?” All I liked was the 1930s styling.

I persevered with the programme because I learned a lesson from Partners In Crime, which really grew on me. Now I'm actually starting to enjoy it. Yes, it is very silly, and there's no getting around the fact that Dr Jekyll was raised by a family in Ceylon yet has a completely different accent to them (my own relatives from Asia had a very odd accent FWIW), but once you're prepared to view it as an adventure story for family viewing, it's still no Raiders of the Lost Ark, but it's waaaay better than Indiana Jones and the Crystal Skull, which I generally pretend doesn't exist.
Things I liked: it's great that Jekyll has an adoptive Asian family – it's fab to see whole groups of Asian characters in a genre show, not just a token one or two. I also think Hils is a tremendous character: she's not eye candy, she doesn't mope over blokes, she drives like a maniac and will take on a lobster monster armed only with an antique shotgun. LOVE HER. Lily and Bella are both non-wimpy female characters, but they are both meant to be pretty and clearly there's 'more' (read: tedious possible romantic entanglements) between them and Jekyll, whereas Hils is a proper old-school adventure hero, only female – Dickless Barton, if you like.
You could grizzle about all that being anachronistic, but this is a kids' show, and I think we can ditch the authentic between-the-wars sexism/racism in favour of showing children that women and people of colour are ACTUAL PEOPLE not just objects for white men to interact with. I'd say the less traditional characters like Hils and Jekyll's foster brother Ravi are the ones that are most engaging, possibly because the scriptwriters haven't had decades of stereotypes to fall back on and so have had to work a bit harder to create them.
The Beholders really are the creepiest monsters I've seen on telly in ages. They're like something out of a Francis Bacon painting; no wonder ITV got masses of complaints about the show being unsuitable for its time slot. They beat yet another encounter with the Daleks or Cybermen in Doctor Who any day. So yeah, the programme's grown on me.

New topic: I reviewed Cold War thriller comic The Coldest City last year. I liked it, but wished there had been more words. Well, I'm getting my wish! Not in novel form, which would have been my preference, but it's being turned into a film. On the subject of spies, it's not vintage but if you're in the UK, the BBC's new thriller The London Spy is amazing and I can't recommend it enough.

Finally, Hayley over at Pearls and Purls gave me a Liebster blog award, so here are my answers to her questions...

1) What's the best job you've ever had?
I've been working in magazines since 1997, and I love it. Okay, like all jobs there are times when I grumble about it but I do actually enjoy what I do. It's creative and means producing things that bring people pleasure, what's not to love?

2) If you could go back in time for one day, which day and year would you go to?
5 August 1962. I'd call an ambulance for Marilyn. Why her? Not sure. I guess because her death seems to have turned her into the ultimate victim, and I'd want to give her a chance to be something else.

3) What is your biggest fear?
Not having anywhere to live.

4) What is your ultimate dream or goal in life?
To have a book published. But I think that will remain a dream! I have ideas for books, but always say I don't have time to write them, though I have friends who have written books while holding down full-time jobs. If I really wanted to do it, I'd put in the effort to do it, just like they've done it. I mentioned The Coldest City earlier; I used to work with Antony, who wrote it. He wanted to work in comics back then, and has achieved that at the highest level, not just through talent but through determination and hard work. My friend Paul Starkey has just had a novella published, after years of commitment. So perhaps my ultimate dream isn't to have a book published at all, but something I haven't thought of... Maybe I'd rather travel more.

5) What is the one thing you would most like to change about the world?
I'd stop people killing each other

6) What is your favourite time of year and why?
That bit when spring is turning into summer, and everything is fresh and green and blossoming.

7) What three words would you use to describe yourself?
Fat middle-aged lady. Though I suspect many people would dispute the 'lady' part of that.

8) What compliment do people give you the most?
They like my hair.

9) What is the best book you have ever read?
Tinker, Tailor, Soldier, Spy by John le Carré.

10) What do you enjoy most about blogging?
The diversity of bloggers, and the windows onto the lives of so many lovely people all around the world. So often the news is full of the terrible things human beings do to each other, and blogging shows you the other side of that, the supportiveness and kindness and all-round decency people are prepared to show each other.

11) What instantly puts a smile on your face?
My kittens. They're noisy little vandals but I love them. And travelling with Mr Robot. The Addams Family. Christmas trees. Red pandas. All sorts of things, really.
Labels: robot data television