Adventures in Burlesque: the naming of cats

I got very stressed by burlesque a while back. Actually, that's not true: I think I was disappointed at the show I was due to be in getting cancelled, and then pressure in other parts of my life manifested as a dissatisfaction with burlesque because that was about the only part of my life I could just drop, so I seriously considered dropping it. However, it seemed stupid to give up when I'd spent so long learning, so I decided to stick with it, and I'm so glad I did. I'm really enjoying classes again.

I think part of it is getting to know my fellow students better. I find the room full of people less intimidating, and I feel more part of things. Also, we've moved on to developing our stage personae. I've enjoyed that immensely, though coming up with a name was hard – T S Eliot may have written 'The naming of cats is a difficult matter', but he'd never tried to name a burlesquer. That's a difficult matter. In a way, you're bringing out your fantasy self, which is hard enough, before you start piling other significances onto your choice of name.

I initially wanted to be Sabrina Seagoon, an in-joke for Goon Show fans, but I was told in no uncertain terms that Sabrina was a 'young' name and I am no Sabrina! If that sounds harsh, it felt bad at first because being told anything's 'not for you' can be hurtful, especially if you're considered too old for it. However, Dulcie's keen for us to get the right names, ones we can work with and that aren't clichés (anything involving 'von' would get kicked to the kerb immediately, not that any of us wanted to use that). And she's right to be firm, because there are lots of forgettable names on the circuit, and also a name carries expectations of performance style: you know just from their names that Vicky Butterfly will be dainty while Dirty Martini is rather raunchy. On top of that, if you're going to have a pro/semi pro/amateur career of any length, not that I'm going to, you need a name you can age and develop with. Being a cheesecake cutie called Bebe is fine when you're 20, but it's all a bit Baby Jane when you hit 40... Short version: I listened to Dulcie, and dropped Sabrina Seagoon.

After lots of names that failed to meet my teacher's high standards, one I'd thought of and forgotten came back to me and Dulcie loved it. And what is my (more Eliot!) 'ineffable effable/ Effanineffable/ Deep and inscrutable singular Name'? I am going to be MAI CARAMBA! Mai's even got a biography... 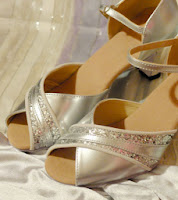 Travellers claim to have encountered Mai Caramba sailing down the Irrawaddy river, smoking cohibas in a backstreet bar in Old Havana, and buying cheap champanska in St Petersburg. She admits nothing, though she does deny ever dating George Clooney, says the stories about minor European royals fighting for one of her discarded stockings are all lies, and claims to have been nowhere near Cannes on the night of the £89 million jewel heist. All you can know for sure about this international woman of mystery is that she is here for you tonight.

The best bit is, it's all true. I have indeed done, or not done, all those things.

Now I have a Name, I need to get to know Mai better: how she moves, what her style is. Initially I'd been inspired by classic adventure stories and had her down as a sort of female Dick Barton, but the more I think of it, the more she fits in with the spy-fi lover in me, so I think I'll end up drawing more inspiration from Alexandra Bastedo in The Champions, Modesty Blaise (the 60s fictional character, not to be confused with famous burlesquer Immodesty Blaise) and the tougher Bond girls. So far it hasn't impacted on my stagewear, though my debut routine will be 60s-inspired anyhow, but I do have strong feelings about how Mai Caramba dresses when she's offstage. She's more strongly 60s than me, with brighter colours and bolder patterns. Dare I say it, possibly a bit Tara Thornton. (I know she was the least entertaining of the female Avengers, but she did have some splendid outfits.) I suppose I need to work out how to carry that over into stagewear.

Knowing Mai makes me want to learn some additional skills, to fit in with her character. Foreign dance steps, perhaps. Something acrobatic. Finding time to learn will be tricky, so perhaps a couple of teach-yourself DVDs are in order... If you know of any good ones, feel free to recommend them.
Labels: burlesque