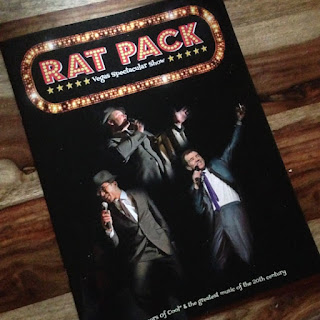 My mum and her partner came to visit last weekend, and we took them to see the Rat Pack Vegas Spectacular Show at Trowbridge's Civic Centre. I don't have photos for you as they asked us not to take photos or video, otherwise I'd have sneaked one or two. We all love the music of Frank Sinatra, Dean Martin and Sammy Davis Jr, and it gave us all something fun to do for the night.

I've never been to an event like that before, with singers recreating performances. They did a good job – 'Sinatra' was very good, 'Dean Martin' didn't quite hit it for me (a good performer, but not Dean Martin-like enough for me), and Sammy Davis Jr... great voice, but looked completely wrong, very tall for one thing. He pulled off lots of SDJ's classic poses, and I think if he grew the iconic facial hair that would help. The performers stayed in character throughout, so 'Dean Martin' would enjoy a drink or two while one of the others were singing, 'Sinatra' would flirt with the dancing girls, and so on. They also recreated some of the original routines from the 1950s/1960s, though I did feel that with some of those involving 'Sammy Davis Junior' the jokes would have been better left in the past. (I might have been in a small group there, however, as plenty of people seemed to find the jokes funny.) I should mention the dancers – two, I'd have preferred four or six – who were decent, and the band, who were excellent.

Initially a couple of things really didn't help the atmosphere. First was the venue: the Civic was extensively refurbished a few years back, and the emphasis appears to have been on functionality. It's essentially one large room with a stage, plus a lobby with a very utilitarian bar. The technical side of things in the main room is fantastic, with a truly impressive lighting rig and a MASSIVE glitter ball. The venue is clean, got plenty of loos, it's really accessible... and it's essentially soulless. The emphasis on functionality appears to have extended to getting furniture and fittings that simply get the job done, so while there were sofas and chairs in the lobby, the sofas didn't match the chairs and neither matched the bar and it all felt horribly lacking in personality and warmth. It's probably great for conferences, but it's not ideal for anything where you want a bit of atmosphere. Then there was the audience. The people who went enthusiastic and splendid, and had dressed up nicely, but there weren't as many people as we'd expected, and they had a lot of hall to fill. Sat in rows of chairs, we were acutely aware of the empty space. I think the show would be better in a theatre or, in a venue like the Civic, it would be better if seating was arranged around tables, like in a proper Vegas cabaret, as that would help the feel of the event immensely.

However, the aesthetic appeal of the venue and the size of the audience aren't things the performers had control over. The show did indeed go on, and once things really got going, everyone who did go seemed to have a tremendous time. I'm really glad we went. The show is touring, and if you get the chance to see it in a venue that doesn't feel like a church hall on steroids, I'd recommend it.

In the Obligatory Outfit Photo I am wearing a cobalt blue dress by Fever (a couple of years old), and a blue AB diamante brooch and earrings set that I'm pretty sure is Coro, but I'm not 100% certain as it's not signed.