Vintage fair isle, off and on the needles

It's about time I gave you a look at my fair isle cardigan, isn't it? Here is is paired with an old Collectif 'Wilhelmina' dress and my everyday handbag. (Out of sight: my new brogues. And for anyone who's interested - probably only Goody - the perfume is vintage Elizabeth Arden Blue Grass Flower Mist.)

I finished knitting this cardigan back at the end of June, but it took me until August to weave in all the ends and sew it together. If you do any sort of craft, you may well understand the fear of finishing. In the same way as Schroedinger's Cat is simultaneously alive and dead until you look in the box, the cardigan is simultaneously perfect and a disaster until it's sewn up. In the end, I wouldn't say it's either perfect or a disaster, but the things I like about it outnumber the things I dislike. I only really dislike one thing, and that's the body length. Mr Robot's sole comment when I tried it on after sewing it all up was 'It's a bit small', which didn't help. I've worn it a couple of times now, though, and am growing to like it.

The pattern is Bestway 1491, which I got as a free download from 1940s Style For You (thanks, lady!). I made it a bit larger in the body, and adapted it to be knitted in one piece to the armpits, which dramatically reduced the number of ends I had to weave in and sewing to do later on. The one thing I didn't think to do was add an extra pattern repeat in the body. I've knitted a few vintage patterns and they're always too short in the body on me, so why I didn't bear that in mind is anyone's guess. The arms are fine, and it falls to the right place at the back, so I can only conclude that my oversized bust is causing the problem at the front. With a plain knit I'd be able to work in a few 'short rows' at bust level to accommodate my front, but I'm not sure how to do that with fair isle. An extra pattern repeat would have lowered the back slightly, but I could have lived with that.
Anyway, as I said, the length is the only thing I'm not happy with. I used a discontined yarn, Sublime Extra Fine Merino 4ply, plus a bit of Rowan and Debbie Bliss wool 4ply to get a colour combo I liked, and so it's beautifully soft. The way the stripes match up across from the body to the arms is smashing. I'm really happy with the quality of my knitting. And, frankly, I've spent so long knitting it that I'm going to get lots of wear out of it, short or not.
After all that slogging I'm already at work on another fair isle project, but this one's not for me. I don't often knit for other people, being very slow, but this is for a friend who's prepared to wait to get the woolly, and as it's in a thicker wool than I usually use, it should knit up quicker. I've done a tension square to check the size will come out right (hence the sheepy tape measure) and am now well under way on the real thing. There's a bit of a learning curve with this one as I'm working with three colours on a row in some places rather than the usual two, but as long as I bear in mind how I've got my yarn arranged, always drawing one colour from the top, one from the middle and the third from the bottom, the tension stays even and the pattern works out. 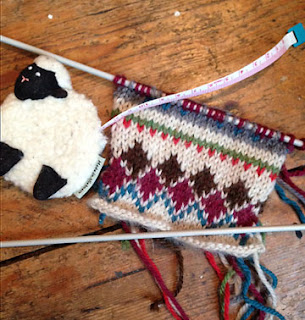