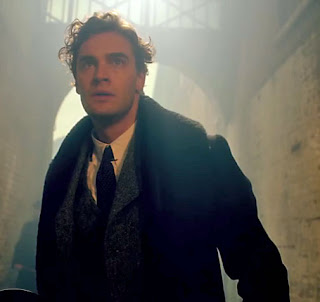 October is not far away, and one of the treats to look forward to is ITV's Jekyll and Hyde. They haven't announced firmer dates than October yet, but it's definitely one to look out for.

Why should you care? For the following reasons:

* It's set in 1930s London, so should be packed with fabulous sets, props and costumes.

* It's scripted by Charlie Higson (The Fast Show, the remake of Randall and Hopkirk (Deceased) and the Young Bond books.

* Higson has cited Indiana Jones films and 1960s spy-fi programmes (specifically The Prisoner, The Avengers and The Champions) as inspiration.

*Richard E Grant will be in it.

For any one of those reasons I'd be paying attention, but all together? Looks like a recipe for win-cake to me. I'm very pleased that it's been made as a ten-parter; British series always seem so short compared to American programmes, though I do suppose that does leave you wanting more.

I'm also pleased to see it has a strong British Asian cast; British Asian actors rarely seem to get as much screen time as those from other ethnic groups. (It annoys me that in all the debate about whether the next James Bond, Doctor Who, whatever should be white and/or male, actors with Asian ancestry are never considered.) Clearly the programme isn't going to be like the original novel – the Jekyll of the programme is the grandson of Stevenson's Doctor – but I learned to accept long ago that certain horror characters are now bigger and beyond the books they first appeared in. Draculas rarely bear much resemblance to Dracula, and when was the last time you saw a Frankenstein's monster that matched the one in the book? A different sort of Jekyll won't be a problem.

However, that's not all the ghostly goodness the mainstream channels will be serving up. While I don't have broadcast dates for either programme yet, I'm also eagerly anticipating Harry Price: Ghost Hunter (an ITV programme based on the exploits of Britain's most famous investigator of the supernatural, set in the 1920s) and The Living and the Dead (a BBC series about a young couple who, in the 1890s, move into a spooky old house). Interestingly, people who worked on Life on Mars and/or Ashes to Ashes, which I absolutely loved, have a hand in both shows - Jack Lothian is writing for Harry Price…, while Ashley Pharaoh and Matthew Graham are working on The Living…

As always, I will be dishing up a humungous helping of vintage horror in October, including this year's Bloofer Lady/Gent, reviews of classic scary films and some spinechilling books.
Labels: 1930s horror television