My Queen brings all the bling to the yard...

First up, thank you so much for the lovely comments about Boycie. We miss her terribly, but we know we were right to let her go. It's funny how such a scrap of fluff can leave such a big hole in your life. 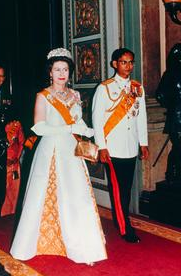 Now, happier things. Queen Elizabeth II has become the longest-serving British monarch! I'm not a royalist per se - I'm not sure I approve of the concept of heads of state or leaders at all, frankly  - but if we absolutely have to have someone in that position, I'd rather have her than elect one of our politicians. For one thing, Boris would look rubbish in a tiara (though he does at least have big hair). Joking aside, after the result of the last general election, I'm not sure I trust the rest of the electorate to get things right. So I'll stick with her Madge.

Also, the Queen has many things in her favour. She's very sparkly - the burlesquer in me approves of that. And I like her dress sense - matchy matchy, bright colours, boxy bag… It's basically what I do, right down to topping it all off with a glittery brooch. The photo is of her in Thailand in 1972, and I chose it because it shows fashion diplomacy at work - she's with the King of Thailand, and she's matched the colour of her dress to the favoured colour of the Thai monarchy. That's not just matching things with the rest of your outfit, that's matching to the entire country.

There was once a display of some of her older dresses at the Fashion Museum in Bath, and oh, the workmanship on some of them, especially the beaded ones by Hartnell, was so beautiful. I don't know why that surprised me so much, as they were couture gowns for royalty, but they had an ornate beauty I don't really expect to see after the 1930s. I guess we all have people whose wardrobes we'd like to go back in time and swipe, and if Diana Rigg's outfits from the black-and-white episodes of The Avengers or Alexandra Bastedo's outfits from The Champions aren't available, I could make do with the Queen's stuff from the 1950s and 1960s. Vogue has a great gallery (I love that flowery hat from the 1960s!) and so does The Telegraph (which also shows that flowery hat - clearly a winning look).

So, congratulations, Queenie. Put your feet up, have a big gin, and see how many tiaras you can cram on your head at once. It's what I would do.