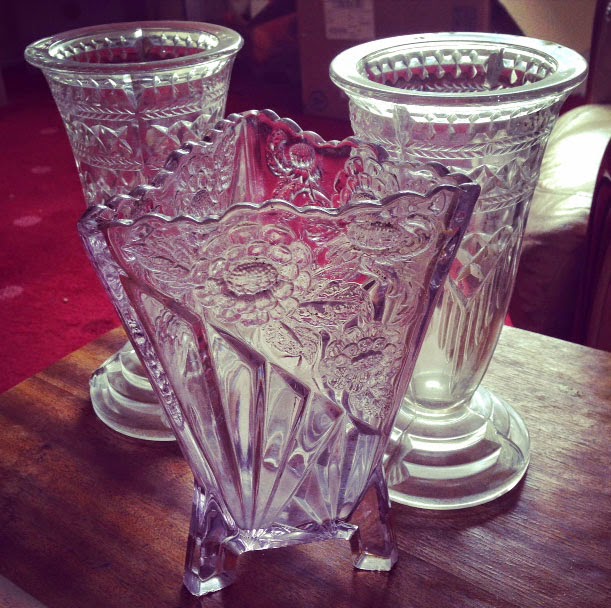 TS Eliot wrote 'April is the cruellest month', but after the February Mr Robot and I had, I'd take unknown April over another Feb any day.

This week, as well as the funeral, we more or less finished sorting out Mr Robot's mum's house. She got mostly new stuff when she retired and moved from Bolton to Norfolk. We found these vases in a cupboard, and they're not her style, so going by their age they must have had some sentimental value. Sadly, we don't know their history. The two matched ones are pressed glass, probably Victorian (though I suppose they could be Edwardian, I know next to nothing about glass.) The other one is clearly deco, though I'm wondering if it's more likely to be 1920s than 1930s from the floral pattern in the top part of each face. I really like nice vases anyhow, and these must have been precious to her for her to have kept them even though they weren't her usual thing.

I've got the deco one in the fireplace right now, filled with carnations. That's a rubbish place for it, I have decided: it doesn't catch the light enough there, so all that splendid detail is lost. I shall have to look out for somewhere more appropriate for it. Somewhere where Smello Kitty won't knock it over!

In the same cupboard we found a lot of old photos. Many were from the 1970s. OH SO 70s! There were some fantastically mini skirts on display, and lots of wedding photos that were dated, but in a genuinely charming way. I like wedding photos that show their age, it's like a little piece of family time travel. And the wallpaper in some of the home shots... ay caramba.

Anyway, among the photos were a couple of me and the Mr from 20 years ago. I shall spare you the one of us dressed up for Rocky Horror (besides, he'd never forgive me for sharing it even if you did) and share this one instead. Sorry the reflection of my iPhone is visible in it, I just took a quick snap. That dress was my absolute favourite. Kays Catalogue, summer 1994, matte black cotton with a lace-up back. I wore it till it wore out, which took about seven or eight years. You can't see the army surplus boots I'd pair it with. I'm wearing surprisingly little makeup in this shot; I used to wear heavy black eyeliner and black eyeshadow, and usually a red-black lipstick. (Never pure black, as that makes real teeth look hideously yellowed.)
Labels: 1920s 1990s homewares Victoriana