I drove a steam train!

Yesterday I had one of my best adventures yet when I got to drive a real steam train! For my birthday, Mr Robot bought me a replica steam train driver's outfit and paid for me to have a session driving a train at the Swindon and Cricklade Railway. We had to reschedule it as it clashed with his mum's funeral - something which, obviously, we hadn't planned for. However, the lovely people at the railway were able to move my driving day, and the weather yesterday was absolutely gorgeous, which was a bonus.


Swindon and Cricklade Railway is Wiltshire's only heritage railway, and is a little line run by dedicated volunteers. There are similar lines up and down the country, some with more track and some with less, but all alike in the way the people who care for the trains, stations and miles of track all do it for the love of it. I'm always awestruck by the dedication people put into things like this, working together to create something brilliant.

Swindon and Cricklade is an evolving line, and at present there is the main station, Blunsdon, and then a new station and engine shed at Hayes Knoll. Taw Valley Halt is their newest stop, and gives access to a country park. They do have plans to extend the line further, too. The volunteers are currently working on extending the track to Cricklade, which is a massive job.
We started off at Blunsdon, parking the car in the car park, then saying hello to the man in the crossing guard's hut, before crossing the track into the station. The cafe, housed in a converted railway carriage, wasn't open yesterday as it's early in the year, but that meant we got to have a cuppa in the volunteers' room, another converted railway carriage. I really liked that as we could chat to the volunteers about trains, and about the railway. (I am a dreadful spud with names and faces, and have forgotten everyone's name, so I apologise for that.) The station was beautiful, with gardens and trees, and bird feeders out the back, and the staff say in about a month's time it'll be absolutely gorgeous.
The engine I drove was Spartan, a fat little engine from Poland. Built in 1953, she'd been restored by the Spa Valley Railway in Kent, but was a bit too wide for that line and now runs at Swindon and Cricklade. (While Spartan was bought in, they also do a lot of restoration on site, and the big engine shed at Hayes Knoll houses several works-in-progress - plus a fat ginger cat who was wandering around 'supervising'.) I didn't have to do any coal-shovelling as there was a driver and a fireman in the cab with me at all times. It was fairly straightforward; there was a big lever to push up and down to make it go, and a smaller lever to pull towards me to make it slow down or stop completely. The trick was getting such a big, heavy vehicle to slow down in time to stop at the station.
There were two carriages attached to Spartan. While older carriages are among the current restoration projects, the ones currently in use are both British Railways Mk 1s - which I believe means they were built between 1951 and 1963. After I'd finished driving, a chap named Pete had a go, as he too was having a driving day, and we got to explore the carriages. My favourite was the one with a corridor down the side and little six-seater 'rooms. I'm sure I remember those from when I was a child! The other, named 'Laura', was a 'Standard Open'. It may have been a lower-class carriage in its day, but it's about a billion times nicer than the commuter carriages I travel in when I get the train to work nowadays.
While the engines inevitably get a lot of attention, and most people love a nostalgic ride in a heritage carriage, the thing that struck me on the day was how much hard work goes into the bits people probably don't think so much about: maintaining the track (I have enough trouble keeping my garden in order), cleaning the buildings, maintaining the cafe and toilets and so on. There's a lot of unglamorous labour that goes into looking after somewhere so lovely.
As you'd expect, volunteer-run charities like this have to find ways to raise money. At the Swindon and Cricklade Railway they run family-friendly seasonal specials - a ghost train for Halloween and Santa Specials at Christmas. They also have murder mystery evenings, a weekend featuring all sorts of other vintage steam machinery too, and cream teas on 'The Moonraker', a beautifully restored set of dining carriages. The Moonraker wasn't part of the train yesterday, but I'm jolly tempted to go back for bakes on a train at some point when it is running. I always list their events in my guide to What's On In Vintage Wiltshire if you too are interested in scones and steam. The other event I'm keen to go to is the Wartime Weekend. That's in September, and is, as far as I know, the last big 1940s event of the year in Wiltshire, as the ones in Lacock and Trowbridge happen early in the summer. It looks like being a fantastic day out.
This day was a present from Mr Robot, and it was absolutely brilliant. If you've got a steam line near you, I recommend playing with trains as a great thing to do! 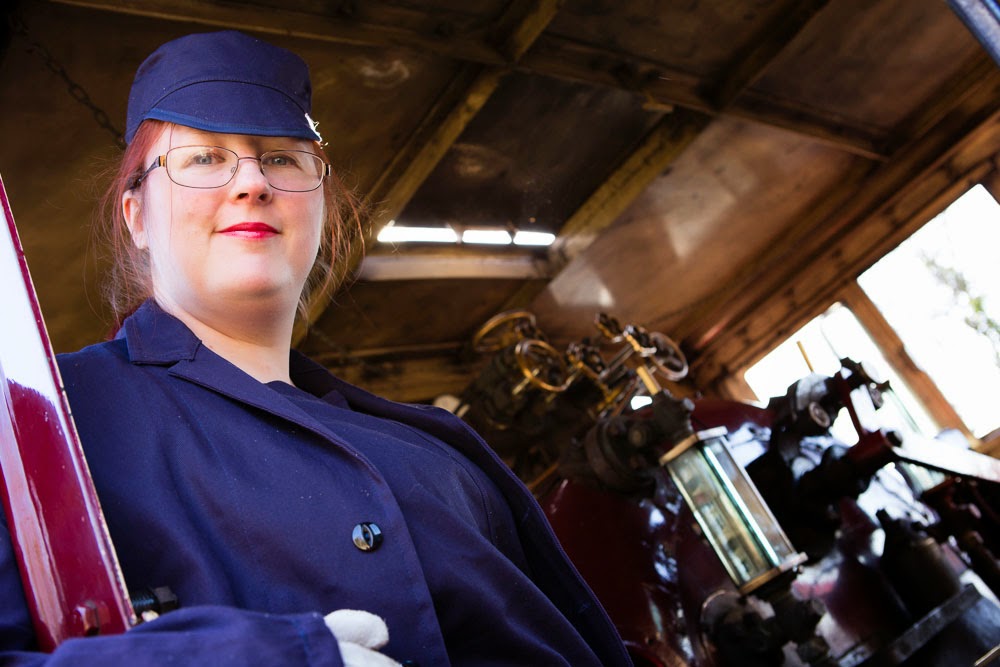