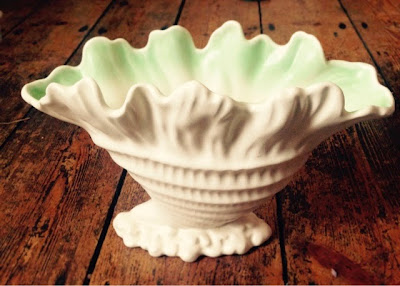 After last week's train-driving fun, this week has been a pretty quiet one. I've got a new old dress winging its way to me from America - a 1950s cotton day dress. I think I'm so eager for the weather to warm up so I can wear my summer dresses that buying a new one off Etsy was the next best thing. It's quite neutral in colour but has a very busy pattern, and I look forward to showing it to you.

I also got a new vase, not that I needed one as we've inherited loads from Mr Robot's mum. However, I was dropping off some clothes in a charity shop and saw the fantastic cornucopia vase at the top of this page for £3. There's no maker's stamp on it, but it looks like SylvaC or Falcon Ware, and I'm a sucker for their creams and green shades. It doesn't have any flowers in it yet as I've got my mother-in-law's Victorian ones on show. They look quite good with my gargoyle clock and Mr Robot's ceramic Foo dogs. 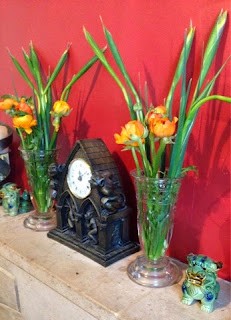 I walked to Bradford-on-Avon yesterday - it took me an hour! - to go to Jumblejelly and pick up the yarn for my Odhams project. I'm going to do the lace jersey in pale grey. It's spurring me on to complete the Fair Isle cardi. I've watched loads of classic Doctor Who while working on that. Pertwee is my favourite Doctor. I veer between him, Tom Baker and Peter Davison, but keep going back to Pertwee. You can't beat a bit of vintage British SF.

Carrying on the SF/fantasy theme, I was pretty upset by the death of Terry Pratchett. I started reading his books in the late 1980s, and when Mr Robot and I got together at university he was a fan too. Agreeing to merge our Pratchett collections was a landmark point in our relationship, as it signalled conviction that we would stay together and there were no worries about who'd get custody of the books when we split up!

So, that's my week. How has yours been?