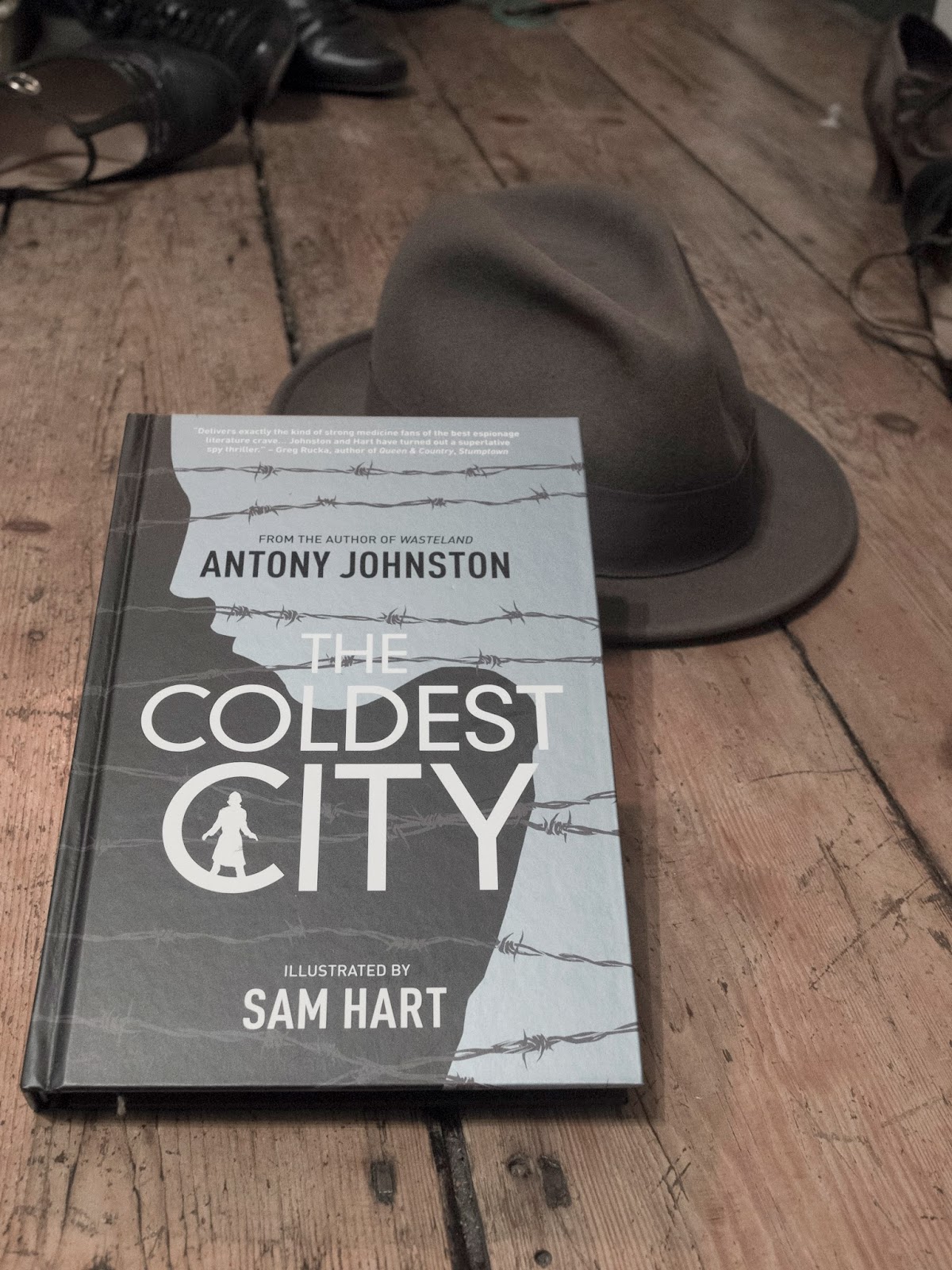 Cold War spy stories are increasingly rare these days - with the Cold War over, that's no real surprise. However, I love a good espionage story, whether on film or in a book. The Coldest City is the first one I've read in graphic novel form.

This story is set at the end of the Cold War. The action actually takes places while the Berlin Wall is coming down. Lorraine Broughton, a British agent with no connection to Berlin, is sent to the city after another agent is killed there not long after one of his sources promises him a list of all the agents, on all sides, in Berlin. Because much of the story is told by Broughton at her debriefing, you know something has gone wrong, but what, and when, at at whose instigation, you have to wait to discover.

I liked Sam Hart's sparse, angular black-and-white artwork. I always loved mono artwork in 2000AD back in the 1980s, and was gutted when they switched to colour. You really see the power of pure monochrome in The Coldest City and, of course, having only two colours is perfect for a game of two sides. I also think the storyline is fascinating; writer Antony Johnston pulls no punches and does create a tense, complex tale. It's a proper old-school spy story, and it's refreshing to have a female lead character. (One who's in no danger of ending up on Escher Girls, either.)

There is a 'but', and it's a deeply subjective 'but': I really would have preferred there to be more words. Perhaps it's because I work with words, and am not really a terribly visual person. I remember words and music and smells far more than pictures. More words would have spoiled this as a graphic novel, it's beautifully weighted in its current form, so I'm not wishing for more words within the graphic novel... what I'm wishing for is an actual novel. As I said, that's very subjective. It's a backhanded compliment of sorts: The Coldest City is beautifully done, to the point where I wish there were more of it for me to linger over.

So, my big but aside, would I recommend it? To graphic novel fans, definitely. It also might be a good dose of realism for teens who think spying is all Spooks and James Bond; it's a world away from that sort of silly whizzbangery. As a fan of spy novels I don't regret buying it, but I'd probably reread a John le Carré or John Buchan before this.

Disclaimer: I bought my copy for full price with my own money. Antony and I used to work together years ago, but if I'd hated his comic, I simply wouldn't have reviewed it here. I liked it enough to tell you about it!
Labels: 1980s comics spy