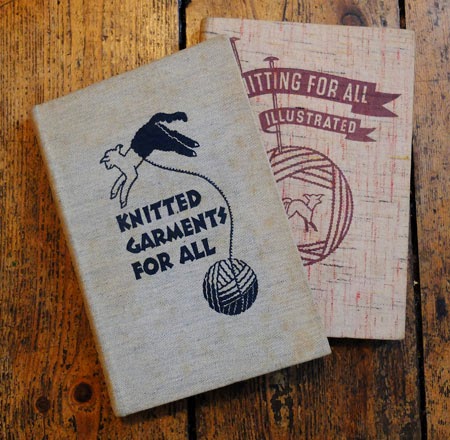 This week my friend Sarah - whose wedding cardi I knitted - got in touch and asked if I'd be interested in buying a couple of Odhams knitting books another friend of hers was selling, so I said yes. Today Sarah delivered them. She was wearing her wedding cardi! I'm so happy that she likes it so much.

These books are from the 1940s, and they're real classics. You may have seen similar ones for sale at vintage fairs or even own some. Susan Crawford has an impressive stack of Odhams knitting books. Unlike later publications I own, such as Knit With Norbury, there's a strong emphasis on knitting for men in the books I bought today, with extensive sections of jumpers, cardigans, socks, mittens and headgear for the chaps, though the war itself is never mentioned.

There's also a typically wartime focus on make-do-and-mend, with chapters at the back of both volumes on restyling old knits. One way was to cut out worn-out areas and combine the good bits with other knitting or fabric sections, which is what you can see in both the pictures below. The child's dress is a too-small frock and old cardigan turned into a fake-cardigan-dress garment, while the woman's jumper is a shapeless old cardigan that's had a contrast front and collar added to turn it into a smart jumper. 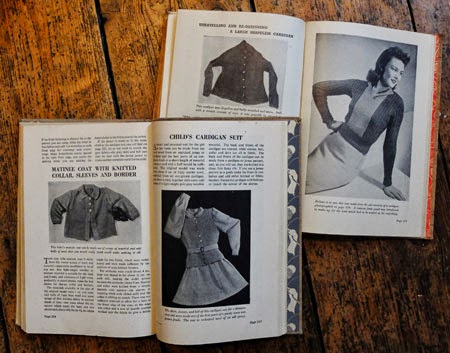 The other way to reuse a knackered old knit was to rip back the entire garment, and steam the usable wool to remove any kinks before reknitting it into something completely different. There are little knitteds, like hats, gloves and waistcoats, which make use of small amounts of wool. Nothing could be wasted! It's very difficult to do that sort of thing today as most modern knitwear is factory made from cut-and-seamed knitted fabric, and if you try to rip it back you end up with lots of short fragments of yarn, not a nice usable length.

One book also has a chapter of colourwork garments; when you recycle an old woollie you rarely get back the complete amount of yarn, some is wasted. Fair isle and other colourwork styles use less of any one colour so knitting in several colours is a great way to get a large knit out of two reclaimed colours, neither in a large enough amount to make a garment by itself.

The 1940s isn't really my era (stylewise, I'm one for the 'streamlined' eras, either deco or midcentury), and I couldn't picture myself making too many of the items from the books, though a couple did catch my eye. The lace stitch blouse is really pretty, and has a cute pointed-edged collar, and the turban hat is tremendous fun. There's also a lovely lace bedjacket in the same volume as the lace stitch blouse; I don't know why I want a knitted bedjacket because I certainly don't need one, but I do adore them. (Do you have a bedjacket? There just seems something deliciously leisurely about sitting around in a nightie and bedjacket reading a book. Though I'd probably be wearing flannel pyjamas under mine and watching Star Trek, and thus the romance is deaded...) 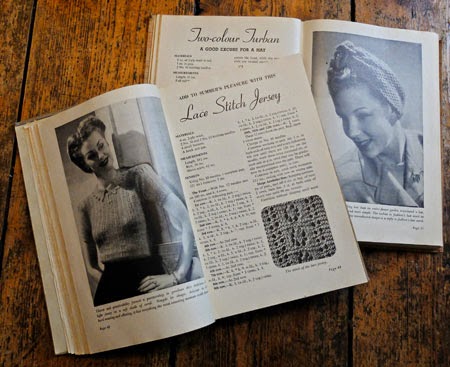 Of course, any new knits will have to wait. I'm still plugging away at my 1940s fair isle cardigan. It's slow going, as I'm not the quickest knitter in the world, fair isle is time-consuming and I'm knitting the fronts and back all in one piece, but I am very pleased with how it's progressing. I'm still not 100 per cent convinced by the teal band, but I love the little row of flower shapes and think it should all look jolly nice when it's finished. 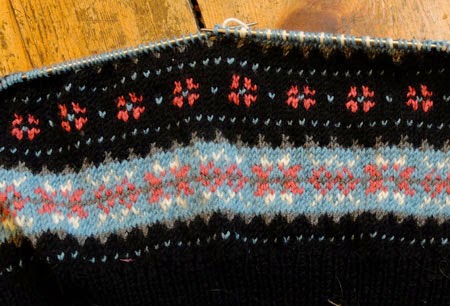