Another quietish week for me, with lots of vintage going on but nothing worth a complete post on its own (or worth it but lacking decent photos!) so I thought I'd do a roundup for you.

MAKING
I've been plugging away at the Fair Isle cardigan. Oh, so slow! But I keep telling myself it takes a single stitch to start something and a single stitch to finish it, so if I only manage a single stitch each day, I'll still be making progress. I want to get it finished before the cold weather really sets in, though, as it'll look perfect with a 1940s-style 'Wilhelmina' dress I got in the Collectif sale back in the spring. I also started embroidering a pillowcase, using one of the vintage transfers I bought from Claire at Eternal Magpie. You see so many people chopping up vintage embroidered textiles, it's nice to be creating something new. Boycie (usually called 'Smello Kitty' on Twitter) was on hand to supervise.

When I had my trunk clearout the other week and had fun rediscovering a couple of 1990s dresses, I also found some craft projects that really need finishing, like this hardanger table runner – it's a traditional Scandinavian style of embroidery, but one that picked up a bit of popularity in the 1950s here in Britain, with colourful versions being moderately trendy in the 1960s and 1970s. This design is from a 1950s book. As ever, I couldn't possibly try doing something quick or small... 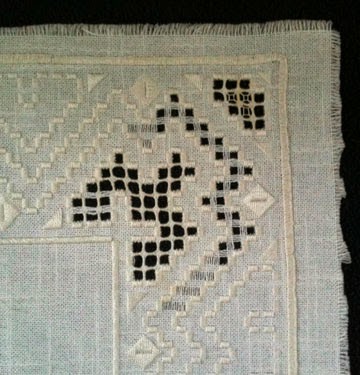 SHOPPING
I've got a new thing. As in, actually new. A 'Nancy' dress from the Boden sale, which I hope to do a proper shoot of this weekend because it's so lush. I even got asked if it was 1950s, that's how retro it looks. And then I won £100 of Debenhams vouchers in Gemma Retro Chick's giveaway. I'm telling myself I'm not going to spend it all on Doreen bras, I'm going to take a proper look round the shop and see what they have that suits my style. Their website is a bit overwhelming, so hopefully shopping in person will be easier.

TRAVELLING
I haven't done any actual travelling, but plans have been made. Tickets for Vintage Nostalgia 2015 are now on sale, and I've ordered weekend camping tickets for Mr Robot and myself already. The event gets more and more popular each year, and this time camping is pre-booked only (no rocking up on a whim) so if you want to camp, get your tickets! I'm also planning a trip to London early in October as I'm going to the press day for the British Library's 'Gothic Imagination' exhibition. Big London, on my own. Scary.

TELLY
I rewatched the second series of The Hour. Damn it was good. WHY did the BBC not do another series?

And that was my week in vintage. It was a good 'un! It's not all I've done, but it's the stuff that involves old tat. I also reread Mira Grant's Newsflesh trilogy over the Bank Holiday weekend: bloggers, infectious diseases, zombies and political conspiracy. With a perfect balance of paranoia and the walking dead, I highly recommend it though it's definitely not vintage! I hope your week has been fun too.
Labels: 1950s embroidery events shopping