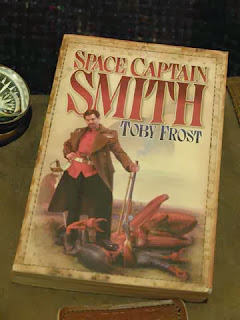 Sit back and enjoy something silly. I mean spiffing. Or do I mean both?

As much as I enjoy a good adventure story, it’s a sad fact that the earlier the book was written, the more likely it is to contain offensive elements. Edgar Wallace wrote some ripping yarns sadly often tainted by 19th- and early 20th-century racism and sexism (reviews of The Green Archer and The Case Files of Mr Reeder), and the less said about Sapper’s Bulldog Drummond in this regard, the better. However, there’s also a lot to enjoy in an unwavering faith in heroism, decency (even if the standards of what is actually decent have shifted) and the joy of action.

In Space Captain Smith, Frost acknowledges both what was wrong with, and right about, the classic adventure story. The titular captain is a citizen of the Victorianesque British Space Empire. Beefy of build and tiny of brain, he’s loyal, kindhearted and frequently awful without meaning to be - but those around him recognise his attempts to be a good man and forgive him. After years behind a desk, Smith finally gets his first ship, the John Pym, and sets off with his headhunting alien friend Suruk the Slayer (simultaneously a critique of vintage portrayals of ‘natives’ and of aliens in science fiction) and simulant pilot Polly Carveth (unbeknown to him, a sexbot on the run from the job she didn’t want) on a simple mission to take a woman called Rhianna from her hippie planet home to another planet. The ship is a wreck, the Pym is pursued by both fascist, insectlike Ghasts and the religious extremists of New Eden, and things all get entertainingly chaotic.

I love the way Frost weaves in geek culture allusions. Space Captain Smith isn’t as littered with references in the way that Kim Newman’s novels (Anno Dracula; The Bloody Red Baron; Professor Moriarty: The Hound of the D'Urbervilles) are, but every once in a while one will glint up at you - the reference to Strauss playing while spaceships wait to dock will bring a smile to the face of anyone who knows their classic videogames, while the bowler-hat-wearing hoodlums who attack the team are entertainingly recognisable in their brief cameo. Often Frost mashes up influences: just as Suruk is simultaneously ‘the native’, the Predator and even a little Chewbacca, the simulant bountry hunter who pursues Carveth on behalf of her owner shows elements of Marlowe, Bogart and Rick Deckard. You don’t have to get the allusions, though: the story is enjoyable even if you don’t.