A Christmas Gift for You From Phil Spector [music] 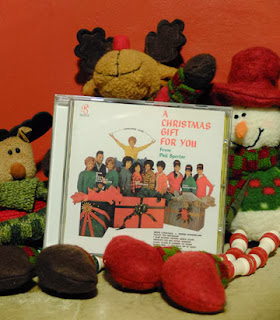 Actually, Phil Spector didn't give this to me, Mr Robot bought it off Amazon. If you want to get away from the usual Christmas music diet of Slade, Mariah Carey and Wham but still listen to something festive, there are loads of CDs around. (I reviewed some jazz and swing Christmas music CDs back in 2011.)

A Christmas Gift For You From Phil Spector was originally released in 1963, and it was rereleased in 1972 as Phil Spector's Christmas Album. Whatever you call it, it's 12 wonderful festive songs performed in producer Spector's famous 'Wall of Sound' style. My favourites are Darlene Love singing 'Marshmallow World' and 'Winter Wonderland' and The Ronettes performing 'Sleigh Ride', but there isn't really a duff song in the dozen.

Got a Christmas party coming up? Get this. Your guests will thank you! It's festive and upbeat without being made up of all the usual suspects.
Labels: 1960s Christmas Music