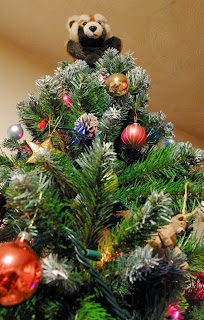 Hullo! I hope you had a good Christmas. Mr Robot and I aren't travelling this Christmas as he has to work, so we had medieval-style spiced beef on Christmas Day (rubbed in spices, salt and saltpetre every day for a fortnight beforehand, then roasted) and roast goose for us and three friends on Boxing Day. We dubbed Boxing Day 'blorpfest'; we're still eating our way through the fantastic toffee-nut pie Ian bought, and Matt and Lucy's monster cheese board. Blorp!

I didn't receive many vintage things this year, though I did get a complete box set of The Addams Family telly programme - woohoo! On the geeky front, I got a bottle of Star Trek Pon Farr perfume. I know, TV tie-in perfume, but I wanted it so much, no matter how bad it would turn out to be. Actually, it's a modern, inoffensive fruity floral, fairly light and quick to fade, so it won't horrify the workmates. I will wear it.

Mr Robot also got me a couple of Christopher Fowler's Bryant and May books. I've mentioned loads of times that Fowler is one of my favourite current writers; he's the writer who taught me to love London, and his books are always stuffed with interesting facts. Bryant and May and the Memory of Blood is the ninth in the series, and (I think) one of the most enjoyable. Victorian Punch & Judy puppets feature in it, which immediately grabbed my attention as this autumn I'd binged my way through Ben Aaronovitch's London-based PC Peter Grant books, the first of which, Rivers of London, also features Mr Punch.

Punch is, in many ways, as English as you can get. But wait, you say, he came from Italy originally. Ah yes, say I, and that is precisely WHY he is so English – because we are a nation of peoples from all round Europe and the world, stirred together and merged into one constantly-changing, always-ourselves, population, and while other cultures made Mr Punch, they abandoned him but we kept him alive, because we are at heart a restless and anarchic people. You can't be the descendants of thousands of migrants and globetrotters and not be a little restless somewhere in your soul. Fowler's crime story is off the wall but theoretically possible, Aaronovitch's tale is a supernatural crime story, but they both seem to identify the essential anarchic spirit of Mr Punch.

Of course, Punch is also a horrible criminal, who does awful things, and that also happens in both books – while there are no graphic descriptions of the smallest victim in either novel, I'd avoid reading either one if you find nasty things happening to children upsetting.

I do fear for Bryant and May. Fowler's elderly detectives are well past retirement age, and I worry that they're not long for this literary world. However, they do their thing with aplomb in Bryant and May and the Memory of Blood, getting mixed up in the world of the theatre after a really quite horrible murder, and solving it because only they have the bizarre skills required to put all the clues together... The history of London's theatres, the story of Punch and Judy, and the state of the modern city all merge in the plot, and a detective needs to be something special to find that sort of killer.

I devoured Memory of Blood. I refused to allow myself to sleep before I'd finished it, which left me feeling slightly regretful. But wait! I also got the next book, Bryant and May and the Invisible Code, for Christmas. I hope that's as good. I'm going to gorge myself on it now...
Labels: books