The Wartime Farm Sleeveless Pullover in all its glory 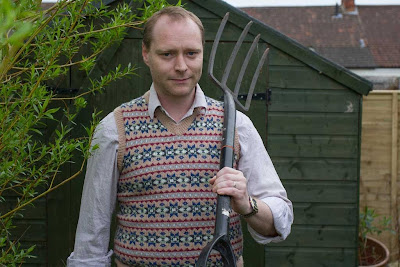 Hoorah, my latest column for Simply Knitting is now in print, and that means I can share a few more photos of the Wartime Farm Sleeveless Pullover with you. I actually completed the knitting back in May, but didn’t want to put any photos up until I could be sure I wouldn’t inadvertently use a duplicate of whatever ones the magazine printed.

My aim in writing the column was to tell readers who aren’t massively active online - and certainly when I was on Simply Knitting fulltime there were lots of those - all about Susan Crawford and Charly Surry’s (Landgirl 1980) work in getting permission to do the pattern, creating it and publicising it to raise money for the Women’s Land Army Memorial. I hope a few of those knitters do decide to go online to buy the pattern; it’s a really good cause. 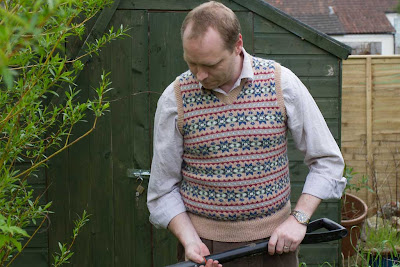 Mr Robot did not enjoy posing for the photos, as he hates having his photo taken. But pose he did! He doesn’t seem to hate his tank top, as it’s nice and warm. He’s even worn it in public to 1940s-themed events. I quite fancy a fair isle knit myself now. They’re jolly versatile, as well as great fun to make. However, it will have to wait as I have Sarah’s wedding cardi and then the never-ending navy cardi to complete first.

You can find Simply Knitting issue 112 in the shops right now or via My Favourite Magazines. It’s got a pattern for a great pair of Frankenstein mitts, and comes with a Christmas knitting booklet that’s got a fantastic Fair Isle hat designed by Mary Henderson. (I know I already have a Fair Isle beret, but I’m tempted to knit another, Mary’s design is so nice!)
Labels: 1940s knitting Mai Trumpet I Bloez It