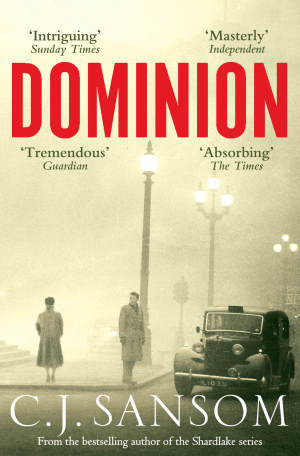 What would have happened if Lord Halifax, rather than Winston Churchill, had become British Prime Minister in 1940? That's the starting point for CJ Sansom's alternate history novel Dominion.

Most of the story takes place in 1952, twelve years after Britain and France have both pursued appeasement policies with Germany, the United States has remained neutral, and Japan is still waging war on China while the Russian front is still causing massive casualties. Two years previously, rigged elections led to Churchill, Attlee and their supporters going underground, forming a resistance movement. Civil servant David Fitzgerald has been quietly working for the Resistance all that time, going into the Ministry at weekends to photograph important documents.

David's old university friend, Frank Muncaster, has a visit from his brother, who emigrated to the US. Frank is socially inept and painfully shy, and while both are scientists, his brother loves to lord it over him. Drunkenly, his brother reveals the terrible secret of what he's been working on - successfully - for the Americans. Frank pushes his brother from a window in fear, and ends up in an asylum. The SS get wind of what Frank might know, as do the Resistance... and David is tasked with getting Frank to safety before the Germans can obtain the scientific secret.

I really love Sansom's Shardlake novels, but wasn't quite so keen on Winter In Madrid, his novel set during the Spanish Civil War. (That said, I think I need to go back to that and re-read it.) The spying and action sequences in Dominion were a lot more interesting to me than the other story interwoven with it, that of David and his wife Sarah having lost their child two years before, and the subsequent decline in their relationship. It made the story more human, more realistic, possibly, but it also detracted from the action somewhat. And relationship drama can have a place in the spy story; John Le Carré's The Spy Who Came In From The Cold is a masterclass on espionage with a love affair. However, in this case I felt it slowed things down too much, and made things plod a bit.

Dominion is a really enjoyable book, though. It's well over 400 pages long, and still I was keen enough to finish it in a weekend. Sansom switches between characters, including German officer Gunther Hoth, who has been sent to Britain to obtain Frank's secret, so whichever bit you prefer, espionage or relationship drama, another chunk comes along fairly rapidly. Also, you really don't know how it's going to end. Right up until the final scenes I had no idea who would live and who would die – or, indeed, whether anyone would live at all. Suspenseful stuff!

SOURCE OF BOOK: I got my copy in Waterstones – it was a buy one, get one half price offer, but this was a pricy book as it's so big, so it would have been the full price one anyway.
Labels: 1950s alternate history books spy WWII