As part of Bath fashion week, a small exhibition of photographs by Norman Parkinson, entitled 'Mouvement de Femmes', was held at the Octagon in Bath. 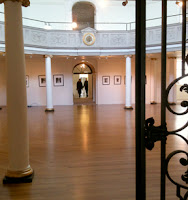 A photographer from the 1930s all the way up until his death in 1990, Parkinson was one of the great British imagemakers, working for Vogue and Harper's Bazaar as well as many other top-notch fashion publications. To me he bridges the gap between the very mannered, posed shots of Beaton and the relaxed, 'Swinging London' style of Duffy, Bailey and Donovan. The main thing that struck me was his use of blur. Usually blur in photography is something to be avoided, but he used it in a way that conveyed not lack of sharpness, but movement.

One image that I loved was from Vogue, and was of a beautifully poised model, but the hem of her wide skirts was clearly moving in a breeze. She was still and flawless, but the picture had a great sense of life. Another that caught my eye was taken in 1970s, and was of Jerry Hall in bright Russian red, waving a Russian flag in front of a Soviet propaganda monument. (It looked like a poster made of stone, all in red and silver.) The flag is blowing and her hair is flying, and everything looks very active. One of the photographers I work alongside commented that Parkinson's images are always perfectly composed, and they really are, but he then shoots in such a way that they never feel artificial or stagey.

Parkinson also shot a lot of images that looked like they had a narrative: I found myself imagining stories behind them. There were people running down the street, or seemingly caught halfway through something – although always in the most perfect fashions. My very favourite photo fell into this category. It's of his wife, Wenda, walking towards a plane that's landed in the African countryside. The plane isn't fully visible, you just see the nose and propeller in the top of the shot, framing Wenda as she walks towards the camera in a trim belted dress, high heels and pith helmet. Who is this beautiful woman, you wonder, and why is she dressed so chicly in such a demanding landscape? Were it not for the helmet, you could picture her just as easily in Paris. I loved it. The photo is titled, 'The Art of Travel', and it's an art I fear we've lost.

The exhibition is a very small one. It runs until the 12th of May. It's free to get in, so if you're in the city and have a little time to spare, I'd recommend dropping in, although it's not worth travelling a long way for in itself.
Labels: 1930s 1940s 1950s 1960s 1970s Bath exhibition photography