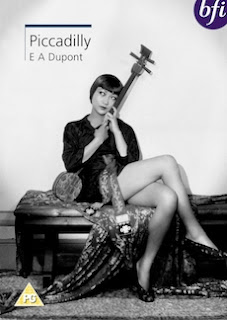 Very little about the plot of Piccadilly is original. A poor dishwasher becomes a dancer and seduces the owner of the nightclub where she works, splitting him up from his girlfriend, the club's former star act. So far, so humdrum. What sets this 1929 British silent film apart from a thousand other Bad Girl stories is the cast: the dishwasher was played by Chinese-American actress Anna May Wong, and so race as well as class was a factor in the story.

Although nowadays she's the film's big attraction, and the first cast member people will name, Wong wasn't the lead. The star of the film, and the person whose name appears first in the credits, was Gilda Gray, a one-time Ziegfeld Follies girl who invented the 'shimmy' dance. She'd already starred in several films in the United States, and in Piccadilly plays Mabel, dancer at the Piccadilly nightclub and lover of its owner, Valentine Wilmot (played by Jameson Thomas). However, Anna May Wong as Shosho acts Gray off the screen. Like Clara Bow, Anna May Wong is a natural star, making you understand every nuance in the character without ever needing speech. Gray, in contrast, overacts a bit, especially when it comes to fainting or showing jealousy. (Silents Are Golden contains comments from some 1920s reviews of the film, and reviewers then seemed to prefer Anna May Wong too.)

Wilmot is a cad. He takes advantage of women. In the film's early scenes it's suggested by a couple of club-goers that he made Mabel a star and his girlfriend more or less simultaneously. He fires Victor, Mabel's dance partner, because he thinks Victor has been flirting with Mabel, then he throws Mabel over for Shosho.

Shosho I have more sympathy with. One of the first things we see of her is her laddered stockings. She's bitterly poor, washing dishes for a living and renting rooms in Limehouse, about as far from the classy side of London as you can get. I found I couldn't blame Shosho for grabbing opportunity when it came her way, although she does treat Jim (played by King Ho Chang), the man who was in love with her even when she was just a dishwasher, very badly. Wilmot uses women, but Shosho is happy to use Wilmot – a bit of justice there.

As for Mabel... Ah, Mabel. Gilda Gray was the star, and while Wong starts out in stockings with holes in them and a tatty old apron, with a beret and stripy jumper for her off-duty wardrobe, Gray has the advantage of stellar outfits all the way through. And yet it's always just too much. Her hair is a weird frizzy bob that detracts from her face (Wong's bob-and-ponytail combination, by contrast, emphasises her beauty). Her outfits are too complex, with glitter and feathers and diamond bracelets all over her arms. Gray's beauty was a delicate, pale sort, and piling lots of things on top of it did her no favours. Moreover, you never really get to know Mabel. She is a dancer, she is Wilmot's girlfriend, that's it. He's a cad, so you can't really believe she's better off with him, and you want Shosho to have some luck so you hope she gives Wilmot what he deserves – an empty wallet and a dumping.

But the film doesn't end like that. I won't spoil it for you.

I bought the BFI remastered version of Piccadilly (complete with blue and amber tints, just as the original film had) with some Amazon vouchers my mum gave me for Christmas (Piccadilly on Amazon*). It's got a specially-written soundtrack too. If you get the chance to see it, I strongly recommend this film. Wong is mesmerising, you'll wish nightclubs looked like the Piccadilly club nowadays, and the dance sequences are great.

*I get no money for linking through to Amazon and the BFI, I just thought I'd make it easy for you to get the DVD if you want it.