All the fun of the Steam Fair! 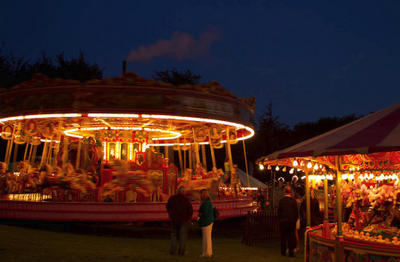 Carter's Steam Fair came to Bath this weekend and it was AWESOME! (If you're in Bath and reading this on Sunday, they're at Victoria Park until 9pm, so get yourself down there.) 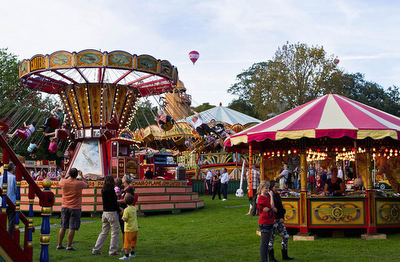 John and Anna Carter started the whole thing off when they bought the Gallopers, the carousel, back in 1975. They had an interest in vintage machinery and entertainments, and repaired the carousel and got it running. They acquired more rides over the years, and today the fair is the vintage travelling funfair, with some extremely rare rides including one of only two remaining sets of Steam Yachts in existence. As soon as we saw the posters going up in Bath, Mr Robot and I knew we had to go along.


I generally don't like funfairs, I think because the one that used to come to my home town when I was growing up struck me as tawdry and quite seedy, and was mainly full of drunk teenagers throwing up on the Waltzers (or getting pregnant behind them). Carter's isn't like that. It's like the funfair you always thought should exist, but could never have been real. Well, it is real.

We arrived and the first thing we heard was proper rock 'n' roll. The Rock 'n' Roll Dodgems not only have pictures of famous musicians on the stand (I got very excited to see Billy Lee Riley, singer of 'Flyin' Saucers Rock 'n' Roll' depicted there), but all the cars are named after musicians too. On the side of the Duane Eddy dodgem there's a painted note that the real Duane Eddy visited the fair in the 1990s and drove his namesake car. Close by was the Victory Dive Bombers. We went on those. they started off going backwards, and just as we got used to that, they switched to going forwards. It's quite a strange sensation hurtling towards the ground in a little metal box.


Anyway, I won't go into all the rides with you, you can read about most of them on Carter's website. The two things that really stood out for me were the Gallopers and the Wall of Death. No, carousels aren't especially thrilling, you sit on a wooden horse and go round and round. And yet... these horses were so beautiful! And right in the centre, where the central column met the roof, were paintings of music hall artistes like Marie Lloyd and Vesta Tilley. A bit further out, hanging from the roof, were portraits of Kings and Queens of England. Around the centre were more famous faces, such as Nelson and Brunel – and the fair's founder, John Carter. The organ was painted with jungle scenes. And as we went round, I could see the men operating the ride shovelling coal into the little engine that powered the whole thing. Real steam! It was like a little ride back into 1910.


THE WALL OF DEATH!
The Wall of Death was simply crazy. The original Indian Scout, imported in 1929, is one of the motorbikes still used for this attraction. It sounds so simple: chap rides motorbike, goes up wall. If you saw it on the telly, you'd probably think, "Meh, so what?" But to see it for yourself, with a real man riding up the wall (to a point where his tyres are only a foot or so away from you), hearing the loud engines and realising that one error would probably kill him, is another matter entirely. I was awestruck by their skill and daring.

We had a fantastic time at the fair. The rides are moved by a fleet of vintage trucks, and many of the showpeople living in vintage living wagons, which limits the fair's mobility: Bristol and South Wales are as far as it goes, according to the fair's website. If you do spot it near you, definitely go. As I said, it's like the funfair you always wanted to exist, but never thought could be real.