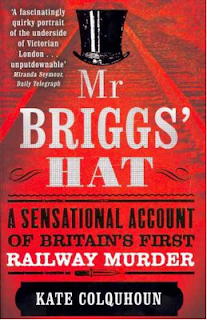 Death comes to the Victorian railway! Having mentioned in my review of Midnight in Peking that I don’t read much true true crime, here’s a review of another true crime book, Mr Briggs' Hat.*

Historically, the case covered by this volume falls into a similar era as the Road Hill House murder discussed in The Suspicions of Mr Whicher. Thomas Briggs, a respectable, elderly man, was found battered and dying on a railway bridge, having apparently been attacked and flung from his first-class carriage. It was Britain’s first railway murder, and the relatively new detectives of the Metropolitan Police investigated the case, even crossing the Atlantic to catch their suspect.

Somehow Mr Briggs' Hat is not as satisfying as either Whicher or Midnight in Peking. In both those books, the author presents the reader with additional information unknown at the time – in the former case, details from people who knew in later life the woman who eventually confessed to the murder, in the latter the notes on the investigation carried out personally by the victim’s father. However, that comes late in both volumes, and I found myself losing interest in this book early on. It’s not the lack of extra information, it’s the overall lack of human connections within the narrative that I found unsatisfying. The accused is an enigma, and that does make you, the reader wonder about his guilt or innocence, but as there’s no relationship between the victim and the accused, or accused and police, the investigation feels dull. I did find myself wondering about the relationship between the accused man and the person who named him to the police, but this is not really explored. Author Kate Colquhoun is to be credited for not putting evidence where none existed, or trying to embellish the facts, but there simply isn’t enough human complexity for this to be compelling as a narrative.

The social background to the case could have been fascinating: as in the Road Hill House murder, Victorian notions of class had a big impact on the way the case was represented in the papers, and in addition the mid-Victorian love/hate relationship with industrialisation and the railways came into play. Yet somehow that too falls flat. The most interesting bit of social history concerns the Victorian debate about the death penalty and public hangings.

So, not an especially gripping read. I have been left musing on whether the conviction was sound, so the story has had an impact on me, but it was a bit of a struggle getting to the end of the book, and I don’t feel I’ve been enriched as far as knowledge of Victorian detectives, the railways or the judicial process go.

*I blame Tim Weaver; I went to the launch of his novel Vanished and bought these two books and one other from a display. (And Vanished, of course – it’s very good, as long as you don’t mind plenty of gore, and I’m not saying that just because Tim is a chum.)
Labels: books crime Victoriana