These books are keepers 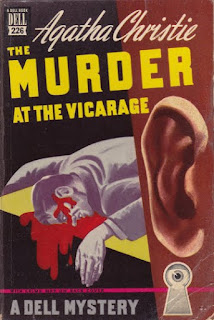 Take one bookworm and hoarder, move her in with another voracious reader and after about 17 years what do you have? No room to move. Mr Robot and I have books in every room, and in the dining room and spare room it's been getting out of control. Last week he bought a Kindle, so we have been able to get rid of some, dropping them off at the local Age UK charity shop. I've been careful, only getting rid of books that I wasn't likely to reread again anytime soon, that aren't especially interesting as objects, that aren't likely to be needed for my work for SFX, and that I have no sentimental attachment to. I'm currently feeling real pangs over a volume of Cthulhu mythos stories I'd had since I was 15, but that's the only one I regret getting rid of so far. (It's being replaced on Kindle, so I'm not losing the content, but I had an attachment to that one as an object.)

Anyway, here are a couple of volumes that aren't going anywhere: Dell 'mapback' copies of Agatha Christie novels. I have four, and they aren't even allowed out of the house - I'm well aware that she who lends a book should be prepared never to see it again, and I'm not losing these ones! They were sent to me in an Odd Ducks 'Crime and Thrillers' swap. American publishing house Dell started printing books with maps on the back in 1943 and stopped in the 1950s, which gives them a pretty firm date. Most were thrillers, although there were some western and romance novels in the series too. 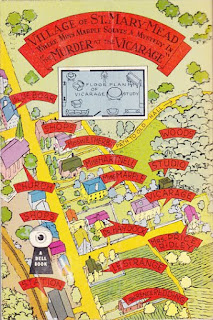 When I first read Raymond Chandler's introduction to the Penguin volume of Pearls are a Nuisance, where he writes "There are the aficionados of deduction...[who] demand a ground plan of Greythorpe Manor, showing the study, the gun-room, the main hall and staircase" I found it odd. Maps? In a detective book? When my mapbacks arrived in the post all became clear.

Not only do the Dells have wonderfully colourful front covers, there's a map on the back of each, and a list of principal characters in the front. I'm torn on the maps because they're so charming to look at, but really you don't need them. And if you need a list of characters, perhaps you also need your memory testing! But I do wonder if the character lists weren't so much to help the reader remember as tasty bait to lure the potential buyer. Then there are the 'teaser' pages at the start of each book. The one in Murder in Mesopotamia asks: 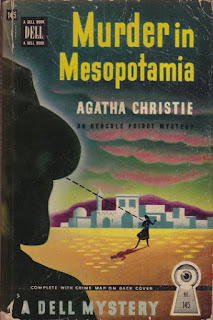 "Wouldn't You like To Know--
How the French monk knew so much about women?
What goes on at an archaeological dig?
What is was that had a whole scientific expedition in a state of tension?
What terror pursued Lovely Louise?
Whether her "fancies were real or imaginary?
If the beautiful Louise was indeed a female Iago"

...and so on. And if that's STILL not enough to tempt you, there's not just a list of chapters, oh no. That page is headed "List of Exciting Chapters--" Yes, excitement in every one! 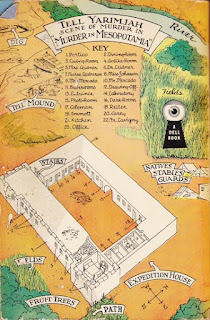 I love my green-spined vintage Penguins, but I do think that if I had a choice between a Dell mapback and a green Penguin version of a novel, I'd take the mapback. They're so much fun in themselves.
Labels: 1940s 1950s books crime