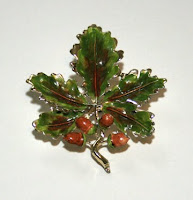 I've been quite good at sticking to resolutions in the past few years. I don't think resolutions should be negative, to stop X or do less Y. They're soul-destroying, especially at the drabbest time of year. Make a resolution that will bring you pleasure, and you will bring cheer to others as well as yourself. The trick is to pick a small change you can make. The first one I ever managed was to switch to Fair Trade tea; I'd been drinking PG Tips for years. Every once in a while the shop will be out of the one I like so I'll have to try something else, but most of the time nowadays I drink Cafedirect.
Last year my resolution was a good 'un: buy more brooches. This may seem self-indulgent, but the amount of genuine vintage I have was (and still is) limited, and a bit of authentic sparkle really lifts an outfit. I probably bought about eight over the year, none cost me more than £7.50, and some were real bargains – I found a Victorian one made in Chester for £4.50, and a 1960s Exquisite oak leaf one for £1.50. Far cheaper than you'd pay for new brooches on the high street. I also got given some nice ones, including a pretty carved one from Charly Landgirl which I've worn loads. By the end of 2011 I had a small but nice selection of sparklers to go on my jumpers, jackets and dresses.

I actually made 2012's resolution back in December, and it's another simple one: buy more buttons. I have plans to knit a few cardigans, and whether I finish those or acquire a dress or top that could be livened up with vintage buttons, those little round fasteners are going to come in very handy.
Have you made a new year's resolution? I hope it's a positive one!
Labels: robot data