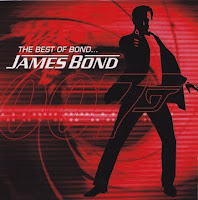 'Diamonds are Forever'. 'Goldfinger'. 'Live and Let Die'. If you don't know at least one of those classic Bond theme tunes, I'd love to know how you got off the desert island you'd clearly been marooned on until yesterday. I've wanted a collection of Bond themes for ages, and my lovely mother-in-law got me one for Christmas. Hooray for Amazon wishlists!

I did have a Bond compilation on tape, recorded off a friend in the last century (hehehe), but that got lost years ago. This CD is right up to date, with the last track being Chris Cornell's 'You Know My Name' from Casino Royale, which means it's got half-a-dozen songs that weren't on my old tape. No bad thing.

Whatever their age, you can divide Bond themes into a few rough groups. There are the real belters, such as 'Goldfinger', 'Diamonds are Forever' and 'Goldeneye'. Shirley Bassey is queen of this style. There are croony romantic ones such as 'From Russia With Love', 'For Your Eyes Only' and 'All Time High' (the theme tune to Octopussy; you can't blame them for not trying to work that title into a song). Most of the croony ones have belter choruses, it has to be said.

Then there are boy's own hero songs like 'Live and Let Die', 'A View to a Kill' and 'The Living Daylights'. I don't think I'd include 'Thunderball' in that group, it's a sort of slow belter. The 'boy's own' songs seem to come in with the rise of feminism: out with the crumpet, in with the ultraviolence, and it's interesting that the latter two I've named are both from the Timothy Dalton era, which did away with a lot of the sex in the films. I'd also put 'You Know My Name' into this group. I did feel that some of the Brosnan era films were too formulaic, as though the filmmakers had assembled the villainess or female ally with a silly name, the villain and a checklist of locations before bothering to put anything like a story together. Even the theme songs hearkened back to the Shirley Bassey style of song. Could the shift to 'boy's own' themes mean a less caricatured Bond for the rest of Daniel Craig's run? I hope so!

Anyway, I digress. You're here for music, not Mim's Halfarsed Theorising About Bond Films. The final section on the CD is the truly crap, namely 'Die Another Day' by Madonna. If I'm never convinced Sheryl Crow has a strong enough voice in 'Tomorrow Never Dies', she sounds like Burly Chassis at her most bombastic compared to Madonna singing the feeble, repetitive, hook-free theme to Die Another Day. That's the only duff track in the set, though, and the compilers did compensate by including belter 'Surrender' by KD Lang, which was used on Tomorrow Never Dies but wasn't the theme tune. It does feel a little like KD is parodying Shirley, but at least she gives it some welly.

There's little point me trying to tell you whether you'll like this collection or not - you almost certainly already know most of the songs and will have a very good idea if it's your sort of thing. I love it!

Source of CD disclaimer: it was a Christmas present, so paid for, but not by me. And if I seem to rave about all my presents, it's because I'm not rude enough to come online and talk about one if I don't like it!
Labels: 1950s 1960s 1970s 1980s film Music spy