A life in patterns 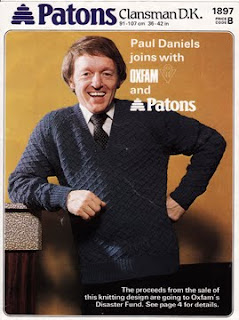 A lady very kindly gave me an A4 envelope of old knitting patterns this week. They'd belonged to an elderly relative of hers who can no longer use them, and she wanted to know they were going to a good home. Looking through them made me think of their original owner, what she must've liked and which parts of her life the patterns represented.
The earliest ones were very practical: Bestway multi-sized school jumper patterns for boys, cardigans for girls and several leaflets of sock patterns. When my Nannie was dying last summer, my uncle mentioned that she'd knitted all the socks for her children. She had five, and I found myself wondering if she ever had time to knit anything but socks! I don't know how many children this lady had, but she certainly did a lot of practical knitting in the 1940s and 1950s.
A lot of the later patterns, from the 1960s through to the 1980s, were for aran designs, and the number of them and span in time made me think that this lady really liked knitting arans. They were for both sexes, all ages, so I guess she must have made plenty for other people, not just herself, enjoying the thick wool and intricate textures. A few daintier designs from the 1980s made me wonder if she was knitting for a daughter or perhaps granddaughter then, or if she sometimes wanted something pretty for herself, although something in the leaflets made me suspect these patterns weren't for her.
And Paul Daniels? I don't know if the lady liked Mr Daniels in particular, thought the jumper pattern was an excellent one or was keen to support Oxfam, but it made me smile.
What will your knitting and sewing patterns say about you? I suspect mine will, after whoever gets them gets over their shock at the sheer volume of them, will see someone with quite vintage and feminine tastes, as most of my non-vintage ones are Louisa Harding. Someone who knitted mainly for herself, no kids, and for pleasure rather than necessity. It's really interesting to look at a person through the lens of the patterns they own. Will someone see one or two well-loved knitting or sewing patterns in your stock, or lots of apparently untouched ones? Thirties slinky, forties action girl or sixties dolly bird?
Labels: knitting