If ever any major celebrity could carry off a steampunk look, it’s Helena Bonham Carter – in fact, I’m not altogether sure she isn’t already doing it.

Helena’s looks and early career in Merchant Ivory films meant in the 1980s and 1990s she was fixed in the minds of the public as the Victorian/Edwardian beauty, forever in corsets. She may laugh about it, but some of that style clearly appealed to her, as she’s a big fan of bloomers, describing them as ‘the perfect alternative to tracksuit bottoms’, and happily wears hers when not working. She’s not a neat, prim dresser, however, being frequently rumpled and tousled. She likes interesting details, especially watches and novel bags. In the past week she’s been soundly slated for wearing red and green shoes to the Golden Globes. Port and Starboard, most excellently steamy, say I. 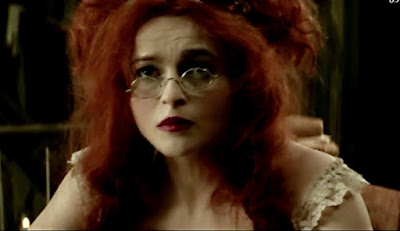 Vogue once commented that Queen Mary looks ‘like herself’, and you can say exactly the same for Helena: she looks like no-one but herself, even on the red carpet. Her willingness to follow her own fashion drumbeat means she may rarely win accolades for her personal style, but she’s one of my style icons. I may not want to dress like her (I doubt anyone is capable of that), but I hope to have the same conviction in my choices.
Labels: icons steampunk