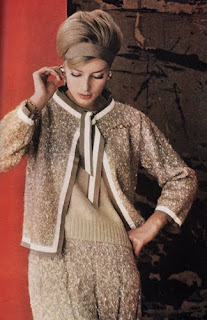 One thing's for sure, over the coming season you definitely won't be able to escape them on the high street, the 1970s in particular. Neither has ever been my favourite decade. Flares. Synthetic fibres. Loud prints. Brown. Glam rock. Okay, most of those are 1970s, but you get my point. You can't imagine Carole Lombard in brown corduroy or Margaret Lockwood in silver platforms.
No time has just one look, though, so I thought I'd start the New Year looking at some things from those decades that I like, although avoiding anything political. Feel free to add more great things from those decades in the comments!
1960s 0ddball telly
The Avengers and The Prisoner in particular. Remakes of both have been attempted and failed miserably. I love them for their weird storylines and when in colour, bright palettes, the strange characters and bizarre settings.
Margo Leadbetter
If I have to 'do' the 1970s in any way, please let it be as Margo from The Good Life. I suspect that Margo would herself have been much happier in the 1950s, which may account for the fact that she managed to be ladylike at (almost) all times. Monsoon have a dress coming out next season that is pure Margo, but it's well over £100. Wait for the sale...
1960s suits
Those cute little boxy suits like the one in the picture are lovely. Given my lack of waist, I've been thinking it may be a good look for me! The ladies who wore them usually had incredible hair styles too, although I suspect large parts of the 'dos were false.
I'm also very fond of the knitted sets consisting of mini dresses with matching socks, although I'm the wrong size and age for those.
The Muppet Show
More oddball telly. Miss Piggy deserves a 'style icon' post of her own, but every Muppet has its own charm. The Vincent Price and Alice Cooper episodes are my absolute favourites.
Nostalgia
Yes, it's cheating a bit to say this, but from the Bonzo Dog Doo-Dah Band's cover of 'Jollity Farm' to films like The Sting and The Great Gatsby, some of my favourite things about the 1960s and 1970s came about when people looked back. The Edwardian era seemed particularly popular. I have a fab '1970s Edwardian' dress somewhere, absolutely covered with embroidery in imitation of an Edwardian lace tea dress, but bell-sleeved.
Go on, say something nice about the '70s!
Labels: 1960s 1970s