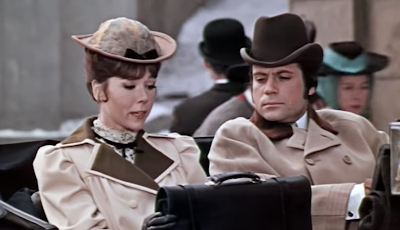 No, work hasn't killed me yet, though it's having a jolly good try. After working 12 days in a row I took yesterday off, and finally got round to watching this late 1960s film which was shown earlier in the autumn on Talking Pictures TV. In it, Diana Rigg plays would-be journalist Sonia Winter, who stumbles across an organisation of assassins. But this is Edwardian England and ladies aren't reporters. Nonetheless, newspaper proprieter Lord Bostwick (Telly Savalas) agrees to employ her to investigate the ring, led by one Ivan Dragomiloff (Oliver Reed). Sonia pays the organisation to assassinate Dragomiloff, reasoning this will bring about its end; cue a lot of travelling round Europe as Dragomiloff decides to get the others before they get him – and uncovers a sinister plot within the organisation.
Obviously this had two big draws for me: it's a film with a young Diana Rigg in it, and it's resplendently 60s-does-Edwardian. I adore 60s retro. Towards the end of the decade and into the 1970s there was a real vogue for Edwardian, which you can see filtering in in everything from the way art nouveau influenced psychedelic art and graphic design (just think of Biba's logo), to TV shows from the fantastical (Adam Adamant Lives!) to the straightforward (Upstairs, Downstairs), to fashion (Laura Ashley). Some films I really love and remember from childhood, like Chitty Chitty Bang Bang and Those Magnificent Men In Their Flying Machines are Edwardian-set but date from the late 60s, which could be where my affection for 60s Edwardiana stems from. 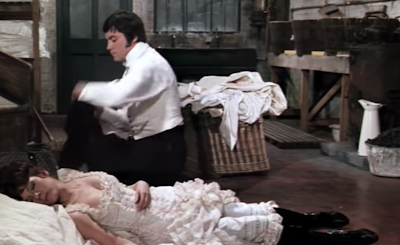 This begins with over-saturated faux nouveau credits, and includes clips from Edwardian newsreels to set certain scenes, which I really liked. The story's as silly as it sounds; Rigg carries it off but I honestly could not see the appeal of Oliver Reed! The late 60s being what they are, there's a good dose of sauce – the Parisian hotel Winter follows Dragomiloff too turns out to be a 'house of assignation', complete with scantily-clad can can dancers, and in Venice there is an extremely glamorous, murderous lady who wears the most fabulous, if anachronistic, costumes in the whole film.

The only thing I really disliked was the character of Baron Muntzof, which I felt played into antisemitic tropes. This could be because the film was based on a unfinished novel by Jack London, written in an earlier era before the damage those tropes could do became so horrifyingly clear. It could be argued that all the non-British characters were stereotypes in a way – the decadent French, the bossy Germans – but noxious antisemitic conspiracy theories still do the rounds today, so seeing Muntzof conspiring with the main villain to take over Europe was jarring to me. It was, however, an extremely small part of the whole thing, and if people aren't aware of those tropes, they won't see the Baron as anything more than a sidekick. I don't know if other people would react to the character as I did.

Even though the one thing I really objected to was a very tiny part of this film, I still don't know if I'd recommend it. It's not funny enough to recommend as a comedy, or suspenseful enough to recommend as an adventure, and the chemistry between Reed and Rigg is lacking so it's not even much of a romance. It's not bad, and will kill 90 minutes nicely – maybe as something to have on while you're doing something else? 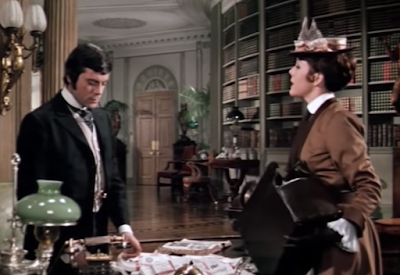