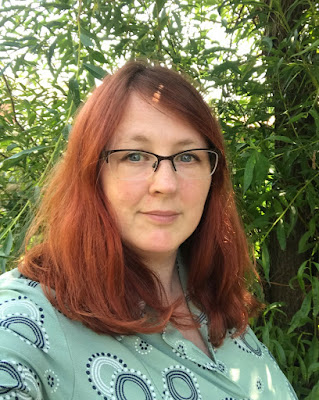 I got this dress on eBay last month. I thought it looked late 60s/early 70s, especially given the geeometric print, and I really liked the colours, but now I’ve got it, I’m not so sure of that date. For one thing, the collar’s quite small, and even though this was – let’s be truthful – not a trendy garment when it was made, I’d have expected it to be larger, in keeping with the fashionable dagger collars of the day. And that made me wonder… is this from the 80s, designed for older ladies but with a nod to styles of 20 years earlier because that's what they were comfortable with? The label’s no help; it simply says ‘Deenie of London’. The seams are raw, not overlocked.

It’s a fairly thin polyester knit, much lighter in weight than my 60s crimplene, so I’ve been wearing it round the house even on warm days (though not in the recent heatwave). It’s nice and stretchy, so is comfy for working in – I don’t want to spend all day with stuff digging in round the middle when no-one but Mr Robot’s going to see it, and even he sees very little of me in work hours. It doesn't stretch quite enough to avoid the dreaded button gape, so I'm thinking of just sewing the front up – the dress pulls on over my head, so I don't need to be able to button or unbutton it.
To be honest, I wasn't sure whether to put this last photo up as I do look larger than usual, but hey, it's my lockdown weight gain. I look larger because, well, I am.  As you can see, the dress has quite prominent belt loops, and if I put a belt on it'd be quite close to my bust (when I make my own tops, I have to add extra inches vertically as well as horizontally to account for the extra curve the fabric has to cover). So I might cut the loops off altogether. As every hourglass figure will tell you, belts draw attention to the waist... and as a definite non-hourglass that's something I don't need! 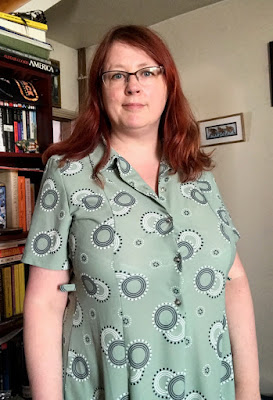