Cosy up with something steamy [books] 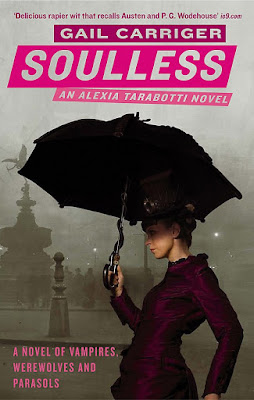 Generally I’m not a fan of too many supernatural elements in my steampunk – I do prefer it to lean towards alternate history, to play with possible technologies and contain a hefty shot of reality. I’m also not generally a fan of romance in stories, being a bigger fan of derring-do. Because of all that, I was genuinely surprised how much I enjoyed Gail Carriger’s ‘Parasol Protectorate’ series of novels. I liked the five novels so much I read her two other series, ‘Finishing School’ (four books) and ‘The Custard Protocol’ (also four volumes) straight afterwards.


Now for the confusing bits: I read the series in the order I’ve listed them, which is also the order in which they were published. However, chronologically, the Finishing School series is earliest, set in an alternate 1850s. It’s all a bit Star Wars, isn’t it? And, like Star Wars, I’d advise you to start reading with the first ones released, ie the Parasol Protectorate books, probably for very similar reasons to why I’d advise you to start Star Wars at A New Hope: there are nuances and twists in the story that will be completely ruined if you encounter the chronologically-earlier stories first, whereas the tension in the chronologically-earlier stories won’t be ruined by reading them second.

(That said, I did a completely unscientific poll on my Twitter feed asking which order people recommended watching Star Wars films for the first time in, and it was a fairly close result, so You Do You I guess.)

Shall we get back to the books? The Parasol Protectorate ones are set in the 1870s, and are the adventures of Alexia Tarabotti, a Victorian miss who just happens to have been born without a soul, giving her the power to temporarily reduce werewolves and vampires to a human state. Purely coincidentally, a werewolf adores her. She solves all sorts of problems in the company of her hat-mad friend Ivy and eventually a whole pack of werewolves, wielding a cunningly weaponised parasol. For example, in the first book, Soulless, vampires are disappearing, and Alexia's blamed, so she unravels that conspiracy. In the second, Changeless, she becomes embroiled in werewolf politics, as some mysterious disease renders the lycanthropes unable to change shape.

The Custard Protocol books take place 20 years later, when Alexia’s daughter – who thanks to her parents, has the incredibly rare ability to temporarily become a vampire or werewolf if she touches one – and a motley crew are flying a gaudy dirigible (the Spotted Custard) around the world tackling diplomatic problems unofficially. While Prudence is at the centre of things, the way the action is frequently seen through the eyes of other crew members means these adventures feel more like a group effort.

The Finishing School books are set on a school aboard a dirigible hiding in a cloud over Cornwall – only at this school, every girl’s learning the skills for espionage and assassination. Think 'violent steampunk Mallory Towers' and you're there. It's definitely my favourite series of the three.

They might sound silly. I suppose they are. But what silliness there is is a good sort of silly, well-meaning romps with plenty of adventure and a good sprinkling of romance. There are queer characters, and in the Custard Protocol series a trans character, depicted with charm and sensitivity. Right now, I reckon a bit of kindhearted silliness goes a long way.

So I'm recommending them, on the proviso that you're happy with the clichés of steampunk – if you can't bear dirigibles or corsets or mechanical animals, they definitely won't change your mind. On the other hand, if steampunk makes you want to pour a fresh cuppa and chuck a bit more coal on the boiler, this is cosy with cogs on.