On Saturday Mr Robot and I went to see Alice Cooper in Cardiff. He was probably last of the big acts of the 1970s who I loved and wanted to see but hadn't got round to. And not long after I said that to Mr Robot, it turned out Alice was touring again, and was coming to Cardiff Motorpoint, which I love as a venue because it's small enough to see the bands properly. We had to go.


There were two support bands. The first was MC50 – basically the one remaining member of early alt rock/psych rock outfit MC5, Wayne Kramer, on guitar, plus Soundgarden's Kim Thayil on guitar, Fugazi's Brendan Canty on drums, and Faith No More's Billy Gould on bass. Quite the supergroup! The vocalist was someone I hadn't heard of, Marcus Durant of Zen Gorilla. Anyway, the music was all MC5, as they were touring to celebrate the 50th anniversary of Kick Out The Jams. Mr Robot loved it. I'm on the fence, but I'm giving MC5's 60s/70s recordings a whirl. Always good to try something new.
We both loved the second support act, the Stranglers. Back in the 1980s, when I was getting into music that wasn't classical, I went straight for the heavy stuff, and my godfather gave me their album The Raven on vinyl, so they're probably one of the modern acts I've been listening to for longest. I loved them live! That tinkling, almost baroque keyboard, and the way the bass plays actual melodies rather than the blues bass runs of most rock bands... It had never really struck me before just how different their sound is to most other bands', but live it really stood out.

There was also a genuine sense of energy to the Stranglers. They may be getting on a bit, but you could tell this was the band who once picked a fight with the Clash, the Ramones and the Sex Pistols all at the same time. I had the basslines to both 'Nice N Sleazy' and 'Get A Grip On Yourself' on the brain for about 24 hours afterwards. They came out to 'Waltzinblack', ended with 'No More Heroes', and were brilliant. I'd love to see them again, in a smaller venue.
Then was Alice. I'd feared he'd have the same shot voice as a couple of older acts I've seen in recent years, but he sounded great. It also hit me just before the gig that most of what I know of his is from the mid-1980s and earlier. Luckily, most of what he played was from that era. He didn't play my favourite, 'Welcome To My Nightmare', but he did do a lot of other popular ones, including 'Poison', 'Teenage Frankenstein', 'Billion Dollar Babies' and 'Under My Wheels'. I'd expected a more props-heavy show, but it was refreshingly light on those, which allowed the music to shine. It was all very polished, though there were no real surprises. The gig ended with 'School's Out', and members of the support acts joining Alice on stage.

And after that it was time to leave and experience real horror: a kebab down Cardiff's infamous Chippy Alley… 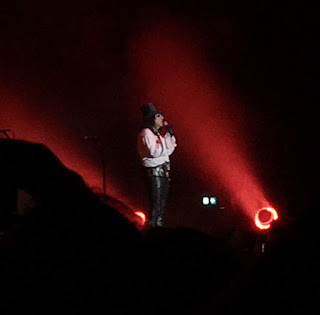