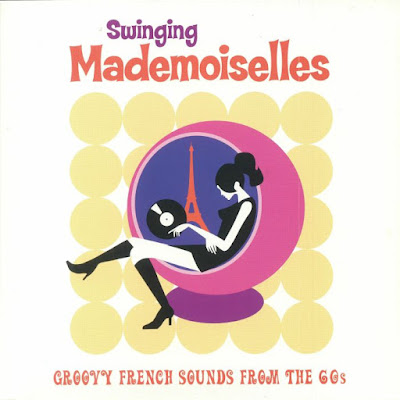 Before my holiday, I started getting in the mood by listening to some French music. I listen to the odd bit of vintage French music at home, and I’m honestly at a loss to explain why, or how it started. After all, I could listen to music I don’t completely understand (or, indeed, understand at all) from pretty much anywhere. It’s usually in the dining room; did something persuade me it went well with food? Did it stem from my love of Django Reinhardt’s music? Who knows?


This album, at any rate, does not go well with food. The music could only be 60s; it’s packed with go-go rhythms and honking brass, naive female vocals and the odd tambourine. It’s definitely pop, and it’s incredibly kitschy. I think that’s why I like it, even though some of it is really not very memorable or catchy. The opening track, ‘7 Heures Du Matin’ by Jacqueline Taieb is attention-grabbing, but others are weak. There are a couple, for example, by a singer called Clothilde, whose recording career was 1967 – and not even all the year. Hearing her songs, the most notable bits of it are the brass parts reminiscent of what the Beatles were doing on Sergeant Pepper, the actual melodies and vocal lines are pretty forgettable.

Although it is authentic 60s music, this album feels to me more like the soundtrack to a fantasy of that era – The Avengers, or even a modern film set then – than the real background to the time. That’s probably owing to my image of the 60s being a British 60s and this not being part of that. Somehow the social commentary of bands like The Kinks or even Herman's Hermits feels more grounded.

But who needs grounded? I’ve been listening to a lot more kitschy music of late. Stuff like this, or 60s-inspired 90s Japanese music like Flipper’s Guitar, or exotica or spy movie soundtracks. The real world seems so damn stressful. A frothy, escapist soundtrack is one way to drift away from all the awfulness for a little while. So slap on a little French bubblegum pop and imagine yourself relaxing in a ball chair. It’s what I’m doing.
Labels: 1960s France Music