Big Goddaughter is currently in England, so last weekend Pete and I took her to London. We were just hanging out and chatting, but to make the most of it I put together a little pub crawl/history tour for us. It's not really indulgent boozing if you're learning something, right? I based it on the recommendations I cheeked out of author Christopher Fowler some years ago  (post here), and added to it.

We started at the Black Friar, with its gorgeous arts-and-crafts interior, of course. (Long-term readers of this blog will know that’s our favourite. BG was really impressed by it – she's from DC, where anything over a hundred years old is classed as old, so was a bit bemused by my description of London as a pretty modern city as the Great Fire of 1666 took out most buildings of any age.

After a pint there we walked up to Fleet Street, on the way taking time to point out Ludgate Street and talk about King Lud, and the alleys behind Fleet Street near St Bride’s, where one of my scandalous ancestresses (great-grandmother of the one who horrified Georgian Calcutta) married a schoolmate of her son in a tavern. She was a widow, so it wasn’t bigamous, but how marrying someone who presumably was a minor in a pub was ever legal is anyone’s guess. He legged it later – as the fourth son of an Earl he must have had prospects that being married to a much older middle-class woman didn't help – and she sued for abandonment. Scandalous! 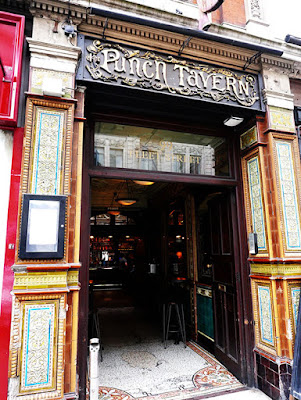 Last time we did a drinky-walk this way we stopped at The Old Bell, but it wasn’t so pretty inside, so this time we popped into the former Victorian gin palace The Punch Tavern instead, and I pointed out both The Old Bell (designed by Wren, and site of one of the earliest printing presses in England) and St Bride’s Church (whose spire inspired the first tiered wedding cake) on the way to Ye Olde Cheshire Cheese.
Ye Olde Cheshire Cheese is still very olde-worlde inside, with lots of dark wood panelling and the vaults of the convent that formerly occupied the site still visible in the cellar, though the pornographic tiles found in an upstairs room that suggest the establishment was once also used as a house of ill repute are now in the Museum of London. It was very crowded when we were there; because it still looks ancient it's firmly on the tourist trail. 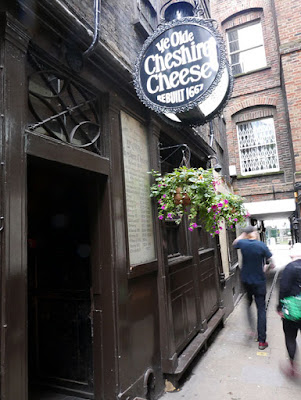 Taking in St Dunstan’s Church (and the statue of Elizabeth I on it is the oldest outdoor statue in London, originally on the Ludgate), Prince Henry’s Room (one of the few survivors of the Great Fire of London), the doors of Temple Church (built by the Knights Templar) and Temple Bar memorial (marking where the City of London and Westminster meet, and heads and other bits of executed traitors once adorned the gate), we ambled next to the Seven Stars.

The Seven Stars doesn’t look as old as the Cheshire Cheese, but it’s actually another survivor of the Great Fire, so is older. It’s also another of my favourite pubs because it has so much personality, with theatrical posters on the walls and a resident cat (named Clement Attlee). It’s not on the tourist trail, but is a hangout for the legal types who are based in the Inns of Court nearby, so while it gets very busy after the law courts close, it's got a real community feel. Mr Robot likes to imagine it being the sort of place Rumpole would’ve hung out.
Our next destination was Ye Olde Mitre, where Elizabeth I, legend has it, danced round a cherry tree, but the best-laid plans of mice and Mims gang aft aglay and it was closed. So we walked a bit further and ended up in the Viaduct in Holborn, on the site of the old Newgate prison. Apparently some old cells are still visible in the cellars, and the first floor once housed an opium den. It’s the only remaining gin palace in the City, and the mirrors and wall paintings are beautiful. Outside, a fountain marks where executions took place at Newgate.
And so ended our trip, which took a good few hours, and many conversations were had and facts were mulled over. If you’re going to hit the sauce, after all, it might as well be in style!