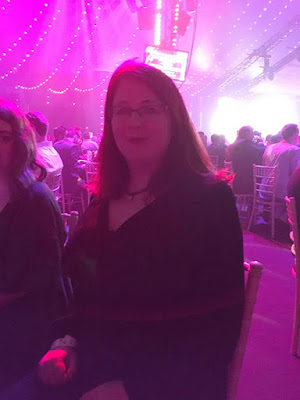 I should have photos of myself in my new House of Foxy Evelyn dress for you, as I wore it to the Golden Joysticks awards last Friday, but the light in the venue was not the best! This is the best I've got, I'm afraid.


The Golden Joysticks is the second-longest-running videogames awards in the world; according to Wikipedia it gets the greatest number of public votes globally. Literally millions of votes are cast in these awards. It's organised by my employer and this year I managed to get a reserve seat. Needless to say I wanted to look good (bearing in mind this is me we're talking about, and 'good' is relative). Usually only one person from each magazine attends, and my editor was listed, so I was on a waiting list and got my invitation on the Wednesday. That limited my clothing options to what I had, or what I could buy on the high street.

I'd treated myself to the Evelyn dress about a month earlier, but was not 100% happy with the way it fitted, though that had everything to do with my own narrow-shoulders-giant-boobs figure, not HoF's design. (I love that late 30s film noir look.) If dressmaking's taught me anything, it's that those features are my own peculiarity! But it seemed silly to buy another dress when I had this expensive one in the wardrobe, and while matte black with voluminous sleeves doesn't scream 'party' it does manage to look smart. I put a few tucks in the back of the neck, as a few people on Instagram had advised me this would help pull in the shoulders, slapped on some shapewear, and was good to go.

(Accessory fiends, I wore a grey freshwater pearl necklace and earrings, and carried my original 60s snakeskin bag, which I found in a chazza a couple of years ago. At the time I thought it was fake snake, but now I'm pretty sure it's the real deal. Perfume was Ormonde Jayne Tsarina, mainly because I had a sample vial I could stash in my bag for topups.) 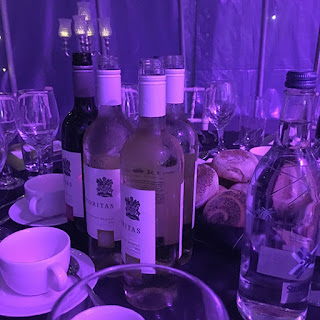 Once I got to the event, any worrying about clothing was moot: everyone was lovely, and very excited to discover whether their game had won, or to talk about the games they had coming up. There was plenty of wine on the table to accompany a three-course lunch, where I was also startled to discover my fat face in the brochure. I knew I'd been asked my opinion on some stuff, but ol' rentagob here is happy to talk to anyone, any time. I hadn't expected it to count for anything. 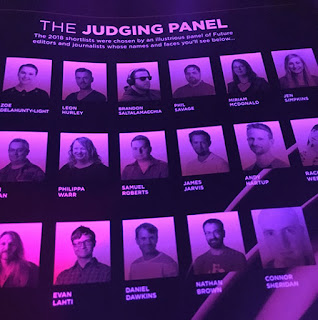 There was more socialising afterwards. Friends whose jobs intersect with other industries reckon games is by far the friendliest industry; they've been to awards ceremonies where people actually boo the recipients! Can't imagine that happening in games. I had a great time, and hopefully will the next time I wear the dress, when I promise I will get better shots, even if matte black is a pain to photograph!
Labels: 1930s 1960s outfit post