Is the vintage trend over? 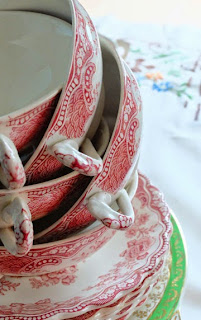 As we're hoping to get a loft conversion, I've been paying more attention than usual to homewares, and it looks like the trend for shabby chic, 'twee' vintage interiors may finally be coming to an end. (Can you believe that the phrase 'shabby chic' was coined over 20 years ago?) I can't say I'm sorry to see the back of it; I nailed my colours to the mast back in 2012 when I ranted about why I hate upcycling. In case you're wondering, I don't hate recycling – taking broken stuff and salvaging the useful bits – I just can't bear people who split up perfectly good teasets to make naff candles, or cut up old books for papercraft projects, or paint and 'distress' perfectly good early 20th century wardrobes. Distress the wardrobes? It distresses me.

I do see people who do shabby chic really well, and I don't dislike the style. But they're people for whom its their natural style, it's their taste. They're not the sort of bandwagon-jumpers who got into it simply because everyone else was doing it, slapping Farrow and Ball paint on everything and filling their shelves with useless cake stands 'upcycled' from perfectly usable vintage plates to fit in with the crowd.

Anyway, I'm seeing far fewer blousy florals now, and far less pastel-coloured furniture too. It's been happening for a few years; even Cath Kidston is doing far more novelty prints nowadays. Stuff that my local chazzas used to hive off to the specialist vintage charity shops seems to be staying on the shelves in my local branches. I'm not sure if it's entirely good news; the trends seem to be heading, in part, towards midcentury modern, especially on the furniture front, where actual wood and slim legs are very much in. But it's a bland sort of midcentury modern, with the bold, experimental fabrics replaced with beiges and other muted, nearly-neutral shades, and without the exuberant paintings and vases and other accents you see from the 1950s and 1960s. I suppose that's good news for people who love the flamboyant stuff. 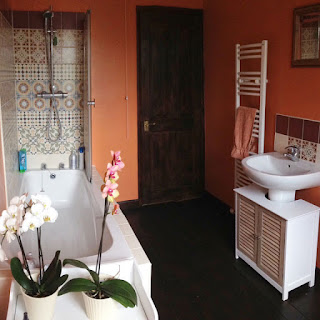 Weirdly, a lot of places also seem to be pushing a world traveller sort of style, which is annoying as Casa Robot seems to have a Victorian traveller vibe on its own, and I don't want people thinking we are following the flock, like sheep. Baaaa! It's as bad as the way we struggled to find bathroom tiles we liked, finally got something, got the bathroom done, and were clearly 12 months ahead of fashion because a year later the sort of thing we'd been looking for was everywhere. But at least all our global knicknacks have been acquired on our travels and have stories to go with them. And, I suppose, it will make it easier to find a bed we like when we do finally get the loft conversion done.
Labels: aargh homewares