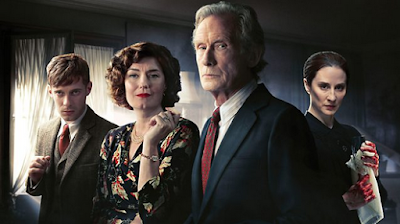 Have you been watching Ordeal By Innocence? The BBC sneaked this Agatha Christie adaptation out quite quietly. I find it odd, both for the lack of fanfare and the time of year – And Then There Were None got a big Christmas push a couple of years ago. Without spoiling it for you, it's the story of a family - a couple and their five grown adopted children, one of whom is married. The mother is murdered, one of the two sons is accused and dies in prison... then, just as the father is about to marry again, someone arrives to provide the dead son with an alibi for the crime.

It's had a mixed reaction, which I can understand. In some ways it's very clumsily done; shots are arranged to highlight THIS IS SIGNIFICANT, and characters are overblown so every little thing they do seems sinister. Everything and anything anyone does has to appear to signify something. No-one ever just does anything. I know Agatha Christie's stuff has a reputation for being cosy, but this tries so hard to be the opposite of cosy it comes out rather silly at times. And questions do arise: in such a large house, with so many people in it, why is there only one maid? Obviously, it's because she's part of the story and they're trying to make her a focal point, and to maintain a sense of claustrophobia, but it's daft. A few silent extras and a bit of normailty wouldn't harm it.

On the plus side, Bill Nighy is fantastic - the one person who really is his character rather than flouncing around ACTING, DAHLING. The post-war costuming is super, especially the fancy frocks, though as Tina Argyll actress Crystal Clarke is the picture of librarian chic. And on the subject of Crystal Clarke, it's great to see a woman of colour getting a role in a Christie adaptation – all the Argyll children are adopted, so why not? (I suspect it makes the Waily Fail readership's heads explode, which is never a bad thing.)

Anyway, the final episode is on on Sunday, and if you can access iPlayer you can catch up with the previous episodes now.

Also in 'quietly sneaked out' news is Secret Agent Selection: WWII, which started last night. A group of volunteers are going through the original SOE (precursor to MI5/6) recruitment process, in full 1940s dress too. As in wartime, they're a diverse bunch, including a policewoman, a linguist, and an ex-soldier. The programme is intercut with brief stories about real SOE agents; the ex-soldier is an amputee and the programme talked about Virginia Hall, the 'Limping Lady', an American female amputee who trained Resistance fighters in occupied France. Last night saw the first three eliminations. I'm not usually into reality TV shows, but the history side of this is fascinating, and I guess most of us have wondered what we'd be capable of in testing times.

Again, it's on iPlayer if you fancy catching up.
Labels: 1940s crime spy television