[outfit post] The woman who would be (Tara) King 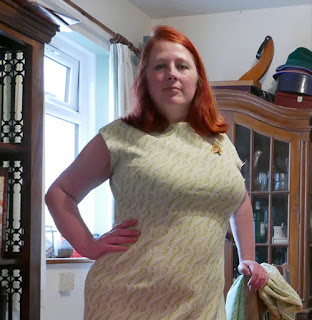 I mentioned the Avengers character Tara King being one of my current style inspirations earlier in the month. Her wardrobe of brightly coloured miniskirts or minidresses and matching jackets really captures the imagination. Well, what do you know, within a couple of weeks, a very nice Taralicious crimplene dress suit had appeared on Kinky Melon's shop website for £35. And now it has appeared in my wardrobe.

I know, I know, I used to detest crimplene. I'm still not 100% convinced by how it feels under my nails, it feels a tad 'squeaky' to me, but Ann and Curtise have made me reappraise its potential, and actually, I do really appreciate some of its qualities, mainly that it won't need ironing (there is a MASSIVE pile of ironing out of view in these shots) and moths won't touch it. I spend so much of my time scrutinising stuff for moths, it's a relief to own at least one thing that won't ever be at risk of being munched. So sign me up to Team Crimplene. 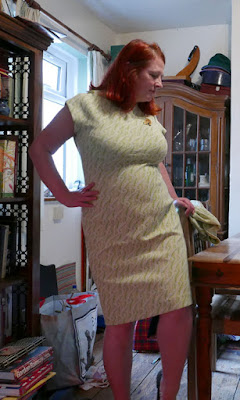 The fabric doesn't look quite as bright in these photos as it does in real life; it's a textured knit of white, chartreuse yellow-green, and bright green. (It's not clear in the photos, but I put on matching bright green eyeshadow for the pictures. It's probably terrifying in person.) The skirt isn't as mini as Tara King's outfits, but it's plenty mini enough for me.

The buttons down the front of the jacket, and little buckles on the side straps, are a white moonglow plastic. Needless to say, 'string of beads in white moonglow' has gone straight to the top of my wishlist. 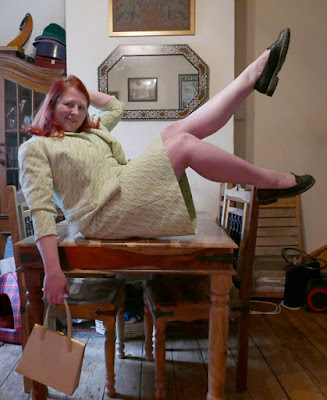 As for other accessories, I really like the way my cream boxy bag looks with the suit, but the only cream shoes I own are cheap lace summer flats. This gives me a bit of a dilemma as my cream bag doesn't actually go with much in my wardrobe, so would I just be buying a pair of shoes to go with this suit? Maybe this means I should be looking for green brogues or loafers instead. Though if I am following the Way of Tara, knee boots might be the answer... what do you reckon? 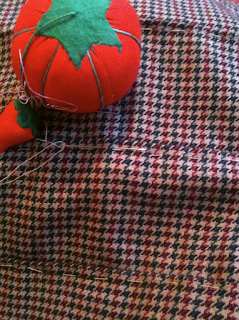 How to wash a dry-clean-only pleated skirt