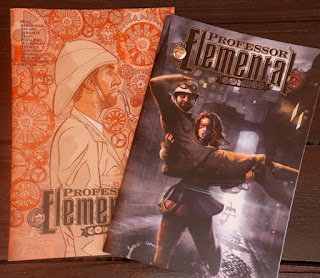 Professor Elemental comic issue 5 - it's the final installment - came out recently. I'd had trouble with the Prof's shopping cart when I'd tried to buy issue 4, but this time it all worked well so I was able to get both at once. And what an excellent read they are. The only quibble I'd have about either one is that the text on the first story in issue 4, 'The Scarlet Woman', is often very small and I really had to squint to read it. (Loved the ending, though!) There's the usual blend of tea, adventuring, comedy and derring-do, and as always the comics are family friendly.

Look at the cover of issue 4 - isn't it fab? I love the graphic pattern all those cogs make.
I was really sad that the series was ending, but got to the end of volume 5 to read 'COMING SOON - SPLENDID COMICS'. Yes, the Prof has decided to broaden the scope of the comic in future, so they won't just be about his adventures, but will cover all sorts of fantastical Victorian fantasy escapades. Things were set up in these two issues by a two-part story, 'Locomotive', which I enjoyed very much, even without the Prof, his orang-utan butler or the usual crew.

One of the things I like about the Prof is the way he works with other artists across a range of genres. Because of that, when he launched his Patreon this week I signed up. If you're not familiar with Patreon, it's an online way for creative types to get ongoing funding for their projects. While things like Kickstarters get things started and you usually receive one of whatever it is you're helping to get made - my most recent chip-in was to fund the production of a 1980s slasher-movie-themed comic, Slashermania - Patreons are continuous, and the artist you support rewards their patrons with early looks at their work, special snippets, exhibitions or whatever their medium allows. As the Prof is mainly a musician, a lot of what I get will be music, but he's also working on more comics, a radio show and other lovely things. I feel that by supporting him, I'm also helping support a lot of the artists he works with, which is a bonus. We've already had an early look at his new tea packaging, and a nice Thank You illustration. 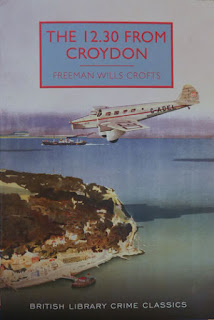 As well as reading comics (and loads for SFX and Horrorville; they are keeping me busy) I also recently read a reissued vintage crime novel, The 12.30 From Croydon, by a vintage crime writer who I'm very fond of. I'm not giving this one a standalone review because in the end I felt a bit blah about it. I've got a lot of Freeman Wills Crofts' earlier work, and he's very meticulous; all his plots are completely possible and often solving the whodunnit depends on the timing and sequence of events. This one represents a bit of a departure as you know from the start whodunnit - in fact, for most of the novel you're inside the murderer's head, seeing how and why things are done. Unfortunately while plotting is one of Crofts' strengths, creating characters isn't, and it's always going to be difficult to sympathise with someone who kills for personal gain. In this case, the killer seems particularly foolish and not very good at understanding other people, so I wasn't particularly affected by his anxieties about what he planned to do and how he schemed to avoid getting caught. The thing I found most interesting was the very early account of how people travelled by aeroplane in the 1930s. I do like Crofts' other work, but this one's definitely the bottom of the pile for me. Read it if you're stuck in an airport and there is nothing else to do...
Labels: 1930s books comics crime steampunk