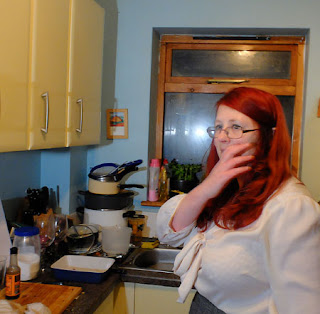 The one bad thing about Christmas: SO MUCH WASHING UP!


I hope your Christmas is going well. What with one pre-Christmas cancer op for one relative, a pre-Christmas decease and another major family drama which I'm not going into here because it wouldn't be fair on those affected, ours looked like putting Eastenders to shame, though everything calmed down and was lovely by the day itself. I confess to being quite relieved that Mr Robot and I had the day to ourselves and the kittens, though.

The kittens have had a wonderful Christmas to date: they've had a tree to play in, and their bauble-snatching technique has developed nicely. Well, Pippin's has. Ziggy uses his usual combination of brute force and ignorance to batter at baubles till they drop off the tree; Pippin is rather brighter and has worked out she needs to go for the bit of string at the top of the bauble and give it a good hard yank, so most of the time she gets them and then Ziggy helps her play with them. We gave them a bit of chicken for their Christmas dinner, which they seemed to enjoy.

Some people aren't into the whole present thing, but we definitely are. My big present was a pair of diamond and emerald earrings from Mr Robot - he said he'd always wanted to buy me precious stones and he thought the green would go well with my hair. And who am I to argue with that? If it was good enough for Liz Taylor, it's good enough for me... He also got me a 1940s Hostess Dress from House of Foxy, which was extra welcome as I'd planned to wear a new-to-me early-60s shirt dress on Christmas Day but then I tore two buttons off it diving to stop Ziggy (it would be Ziggy) eating a polystyrene packing peanut. I don't even know where he found said packing peanut as nothing came wrapped in them. He does seem to have a taste for packaging. Other cats sit in boxes, he chews them. 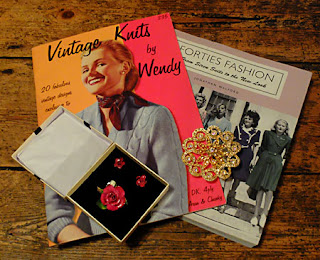 I was very spoiled, getting everything from the Cath Kidston Robots duvet cover I'd hoped for to a flying 'bat' robot (from my dad and stepmum), and several cookbooks covering things as diverse as dim sum and patisserie. I got some lovely vintage things too, as you can see here: Forties Fashion and Vintage Knits from my mum and her partner, the porcelain rose set from Gisela (brilliantly, the earrings are on posts, not clips, so I won't have my usual fear of accidentally dropping and breaking one), and a monster of a diamante brooch from my Vintage Secret Santa (thanks for organising it, Jessica). I'm tempted to find a way to wear it in an updo.

I hope your Christmas is going well, with fab food and pressies and no unexpected family dramas. I'm going to go and read one of my new Bryant and May mystery books, which I am enjoying immensely. Feliz navidad, nadolig llawen and so on!
Labels: accessories books Christmas